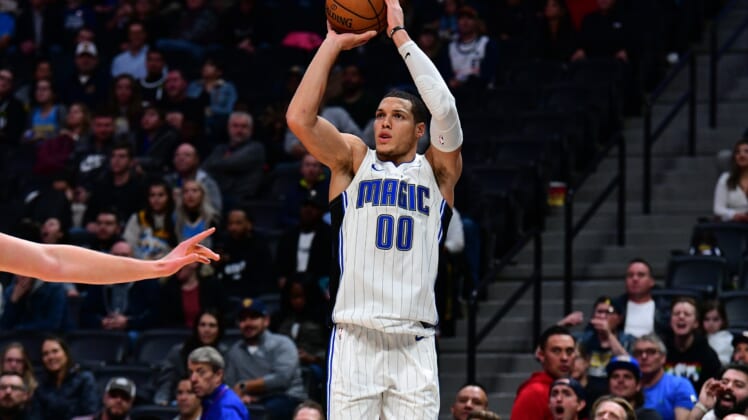 Pretty much since they acquired him in the blockbuster James Harden deal, Houston Rockets rumors have pointed in the direction of a potential Victor Oladipo trade. That has now come to the forefront after Oladipo turned down an extension offer from Houston earlier in the season.

A bit further east, the Orlando Magic could very well be going into fire sale mode ahead of the March 25 NBA trade deadline. That could potentially include trading 25-year-old star forward Aaron Gordon.

According to this note from Kevin O’Connor of The Ringer, the two sides could get together to pull off a blockbuster trade.

“League sources say the deal Houston and Orlando discussed would involve Gordon landing with the Rockets and Victor Oladipo going back to the Magic, the team that drafted him second overall in 2013, or to a third team,” O’Connor reported. “Oladipo would have no future in Orlando, league sources say, so finding a third team might be necessary.”

This could very well get convoluted. Obviously, the Magic would have no intention of keeping Oladipo. He doesn’t fit into their long-term rebuild plan. Instead, the All-Star two guard would have to be moved to a third team if the Houston Rockets are dead set on trading him.

How would a Houston Rockets and Orlando Magic trade look like?

We know that the Golden State Warriors, Miami Heat and New York Knicks are three teams that have shown various levels of interest in Victor Oladipo. Each one could put together a decent package to entice Orlando in a three-team swap.

Obviously, there would be other moving parts. But you get the idea.

Oladipo, 28, is set to hit free agency during the summer. It’s going to limit what the Houston Rockets receive in a potential deal here over the next few days. This is magnified by the fact that Oladipo has struggled shooting the ball on the season (40% mark from the field).

As it relates to Aaron Gordon and the Orlando Magic, O’Connor points to the Houston Rockets, Golden State Warriors, Minnesota Timberwolves, Boston Celtics and Portland Trail Blazers as teams who have had trade discussions with Orlando’s brass.

Still only 25 years old, Gordon is averaging 14.8 points, 6.8 rebounds and 4.1 assists on 45% shooting from the field this season. He can also play all three frontcourt positions. That type of versatility and the fact that he’s under contract for next season makes Gordon a valuable trade chip.

Orlando currently sits at 14-28 on the season. Meanwhile, the Houston Rockets are mired in a 20-game losing streak (that’s not a typo). Both teams should be active ahead of the NBA trade deadline on Thursday. That’s for sure.