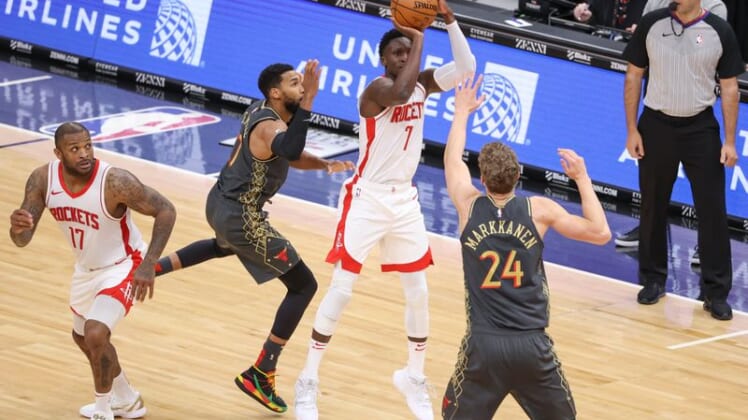 There’s no shortage of New York Knicks rumors with the 2021 NBA trade deadline about three weeks away. In the midst of a surprising season that sees New York at 18-18 and as the fourth seed in the Eastern Conference, it’s not a surprise that the team is expected to be active.

After acquiring former NBA MVP Derrick Rose from the Detroit Pistons earlier in the campaign, the expectation is that president Leon Rose will pull off another trade or two. That now could include a former All-Star guard with the Houston Rockets.

“There are people in the organization that see Oladipo as a really valuable addition to what they have now,” SNY’s Ian Begley noted recently. “I’m not sure how the top decision-makers feel about Oladipo, but the Knicks would have to commit max money to get Oladipo to New York.”

In search of a true star for years and after missing out on the star Kyrie Irving-Kevin Durant tandem back in 2019, it’s not shocking to learn of the Knicks’ interest in Oladipo. Whether he’s an actual franchise cornerstone on a contending team remains to be seen.

What we do know is that Houston is fully planning on shopping Oladipo ahead of the deadline after he turned down an contract extension offer mere weeks following the blockbuster James Harden trade.

An impending free agent, any move to acquire Oladipo would be done under the guise of New York acknowledging to the guard that it will offer him a max-level contract in free agency this coming summer. The Knicks would be able to offer him up to $195 million over five seasons. That’s why these specific Knicks rumors are heating up. It would not be a short-term marriage.

New York Knicks rumors: What would it take to pull off a Victor Oladipo trade?

New York is in a better situation than most teams heading into the NBA trade deadline. Even after the Rose trade, it still has $17 million in cap room. This could be beneficial in a trade with the Rockets given that Houston owner Tilman Fertitta is clearly in cost-cutting mode.

With that said, it would still require a nice bounty to acquire a player who figures to be the most highly-sought after on the trade block over the next few weeks. Here’s how an Oladipo trade to the Knicks could look.

Parting ways with rookie No. 8 pick Obi Toppin, the reigning College Basketball Player of the Year, might be a bitter pill to swallow. Heck, there’s a chance New York could offer up promising center Mitchell Robinson instead.

Even then, acquiring Oladipo to team up with Rose and stud rookie Immanuel Quickley in the backcourt would be an absolute boon for the Knicks.

They’d also move a former lottery in Kevin Knox who has been on the trade block for some time now and doesn’t seem to have a future in New York. Add in the Mavericks’ first-round pick stemming from the Kristaps Porzingis trade, and Houston might bite the bullet here.

From New York’s perspective, this makes all the sense in the world. A starting five consisting of Quickley, Oladipo, R.J. Barrett, Julius Randle and Mitchell Robinson moving forward would be really nice.