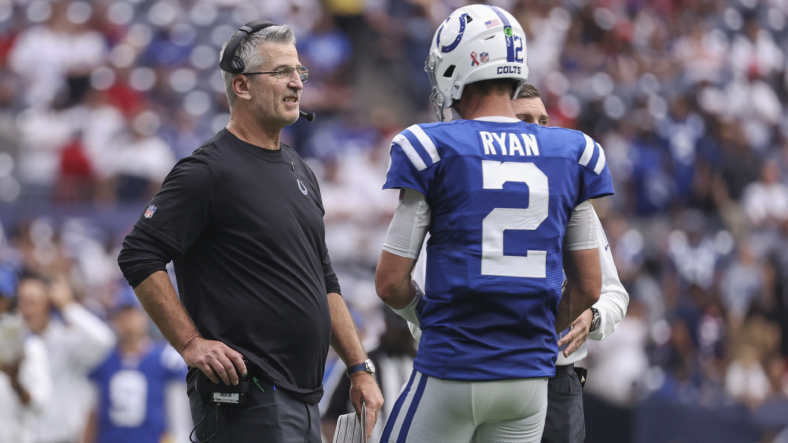 The Frank Reich-led Indianapolis Colts lost another game this past Sunday. Well not really, but it felt like a loss. The Colts actually tied Houston. This is the first time this has happened in 40 years for the Colts. Nobody really thought this would be their Week 1 outcome. Not against the Texans.

This isn’t the first time the team has come away with an unfortunate outcome from a game. There is one thing that all these games have in common. That is coach Reich and his, at times, curious play calling. Now, to be fair, when Reich calls a play and it succeeds, he’s viewed as a genius. And when it fails, well, then his knowledge and ability are openly questioned.

A truth that also must be presented is that the play call itself might be a good one that is just unfortunately not executed properly by the players. The opponent does get paid to do their jobs. So, when criticizing the play call, you must first decide if the call is correct and then if it is the play itself. Let’s examine some of Reich’s curious play calling that has set the Colts up for failure.

Related: Indianapolis Colts showed in Week 1 that they still lack the pieces to be a legit contender

A foreshadowing of future headaches

Traveling back in time to the year 2018 brings us two incidents and a bit of foreshadowing. First up is their game against the New York Jets. The Colts would fall 42-34 to the then-rookie Sam Darnold. Andrew Luck did not have a good game. However, there is one series that left Colts fans scratching their heads.

Former safety Malik Hooker makes an interception, and the Colts move the ball to set up a first-and-goal situation. Their first play was a run with Marlon Mack, who lost a yard. The next was a pass to tight end Eric Ebron who also lost a yard. And then there was a pass to Nyheim Hines, who was unable to hold on to the ball for a touchdown.

The Colts converted an Adam Vinatieri 21-yard field goal to tie the game at 10. It was great to see the team come away with points. What is a bit curious is only calling one run play when at the time, you had Anthony Castonzo and rookie Quenton Nelson on the left side. Why not try to run it behind them again?

Later that same year, the team traveled to their very own house of horrors, Jacksonville. The Jaguars were coming off their surprise run to the AFC Conference title game that saw them fall just short of reaching the Super Bowl. They were led by their stout defense. They had already lost to the Colts in Indy by only three points.

It was Jacksonville’s turn to return the favor. They would pitch their second shutout in as many seasons. Indy lost 27-0 in 2017 and 6-0 in 2018. Jacksonville scored only two field goals! In this game, the Colts entered Jacksonville territory five times and came away with zero points. They went 0-for-3 on fourth downs. To top it all off, Indianapolis passed up two field goal tries in the first half

In fact, one of those was actually a converted Vinatieri kick. It was wiped out after a roughing the long snapper play that set up a first and goal situation from the five-yard line. And yet no points were scored. The final gasp for them was a fourth-and-one from Jacksonville’s 19-yard line with 2:38 remaining. Luck would get sacked to effectively end the game.

So in this game, if Reich had taken the two first-half field goals, the team would have been tied. And instead of having Luck get sacked to end the game, he could have trotted out automatic Adam to put the team ahead 9-6, possibly winning the game. But that’s not what happened.

Fast forwarding to 2020, the team’s second playoff appearance, the Colts went up to Buffalo for a Wild Card game. This game is where we have some fans start to defend Reich’s playcalling even more. Just before the end of the first half, Philip Rivers led the team into the red zone. They had an easy opportunity for Rodrigo Blankenship to kick a field goal, putting them up 13-7.

Instead, Reich decides to go for the touchdown. Later stating in his post-game that he wanted to be aggressive because of Buffalo’s explosive offense. That aggressiveness would ultimately backfire and cost the team the game. They didn’t convert on fourth down, and Buffalo was able to march down the field and score a touchdown just before the half to go up 14-10.

The final score was Buffalo 27-24 over Indianapolis. As previously mentioned, some fans were on board with the aggressive call. Others said to get as many points as you can in the first half, and then you can worry about strategy in the second half. Still, some said that the play selection itself was the error. That the team should have fed rookie Jonathan Taylor the ball to run behind Castonzo and Nelson.

The next season would bring about the biggest scrutiny of Reich’s play calling. Things got so bad that fans wanted him fired and not to just give up playcalling. The first example is the Baltimore game. During warmups, Hot Rod hurt his hip. Regardless, the team still asked him to make some less-than-easy kicks.

In the game, Blankenship would miss a PAT in the third quarter, have a 37-yard field goal blocked, and then miss a game-winning 47-yard field. Now, you can see the issue here isn’t Reich, it’s the kicker. However, knowing that your placekicker is hurt, why is he still asking his player to go about his business as if he’s 100% healthy?

Wouldn’t it be better to call plays that a) get you touchdowns or b) at least make the distance of the kick shorter? You can also do this by making sure your third down distance is more manageable. Meaning staying out of third and long situations. The team does have Rigoberto Sanchez handle kickoff duties, so if the team has a 30-yards or less field goal attempt, maybe you take the kick.

Next up, you have the home game against Tennessee. In this game, fans got to witness 51 pass attempts from Carson Wentz. At this point, Jonathan Taylor had established himself as one of, if not the best running back in the game. He was having a good game too. Yet, Reich opted to put the ball in Wentz’s hands. Wentz would lead the team to an overtime loss by throwing an interception on the attempt that saw Michael Pittman Jr. triple-teamed.

Finally, you have the home game against the defending Super Bowl champs in Tampa Bay. The Colts played well in this game and were even winning. Unfortunately, they would go on to lose 38-31. In this game, you saw them call 26 consecutive pass plays! Tampa’s run defense was stout. However, the Colts would run for 107-yards and Taylor got 83 of them.

After the game, Reich would state in his post-game press conference that he wish he would have gone to the pass earlier, as the team had success. That is a fair point, as the team did indeed have success. However, the calling of a pass play 26 times is head-scratching, for anyone, in any situation.

Related: Re-signing Jonathan Taylor could prove to be a massive gamble for Indianapolis Colts

Now for the most recent incident in Week 1

The season opener for the Colts saw them travel to Houston. On paper, it was set up as a great opportunity for them to start the year 1-0. Instead, the team is off to their best start in years after going 0-0-1.

This game saw the team get to Houston’s two-yard line instead of running the ball with Taylor behind a “great” offensive line. Reich called a wildcat formation where Nyheim Hines would be the one to receive the snap. Matt Ryan lined up out wide and Taylor was back with Hines.

Houston quickly realized this play was going to be a run play. Whether it was Hines or Taylor running ball, it was going to be a run. This play failed miserably and provided a big momentum boost to Houston. We won’t recap the entire game as it’s still fresh. However, it did see Blankenship miss another game-winning field goal. This missed kick would ultimately seal his fate with the team. He was released on Tuesday.

Coach Reich says he believes in his players but does he really?

One position it appears he does believe in is the quarterback. Maybe that’s because he’s a former QB or because it’s the most important position on the team. Regardless, he does not always set his players up for success.

For now, the organization backs and supports Reich. The question, though, is for how much longer? The Colts travel to Jacksonville and will look to exorcise their demons. Hopefully, Reich and the Colts put together a game plan good enough to earn their first victory.

Related: 4 Indianapolis Colts players who could disappoint in 2022