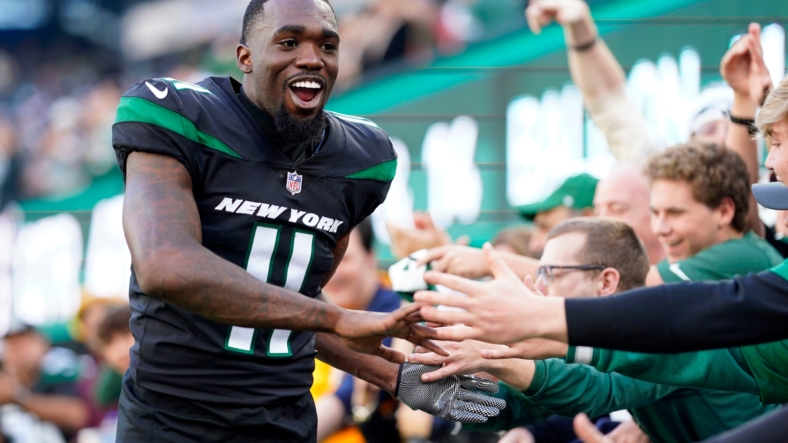 New York Jets wide receiver Denzel Mims was one of the most popular prospects in the 2020 NFL Draft. Three years later, the 59th overall pick wants out and he might need a change of scenery to turn his NFL career around.

Mims showed plenty of promise in his rookie season. While he only played in eight games, the 6-foot-3 wideout averaged 15.5 yards per reception and turned 15-of-23 receptions into first down. Considering the Jets’ quarterback situation and offensive play-calling, it was enough to suggest he could improve in a better situation.

However, Mims quickly fell out of favor with the new regime. Despite the addition of quarterback Zach Wilson and offensive coordinator Mike LaFleur, the production dropped in 2021. According to Rich Cimini of ESPN, Mims didn’t grasp the Jets’ playbook to the level the coaching staff wanted. As a result, he saw even less playing time and New York added more talent to its receiving corps this offseason.

After trying to prove himself in his second year with the Jets’ coaching staff, the former second-round pick is ready to move on. He publicly requested a trade on Thursday with his agent asking general manager Joe Douglas to find a trade partner since he wouldn’t release him.

“We feel at this point a trade is our only option since the Jets have repeatedly told us they will not be releasing him. Joe Douglas has always done right by Denzel and we trust that he will make every effort to find him a new home where he can be a contributor.”

Mims then showcased his talent in the Jets’ preseason finale by catching all six of his targets for 91 yards and a touchdown. This doesn’t seem to be too much of a coincidence. Let’s take a look at three ideal landing spots for Denzel Mims.

The Green Bay Packers need more help at wide receiver. Allen Lazard is poised to be the No. 1 wideout and rookie Romeo Doubs will play a prominent role, but everything beyond that is unpredictable. Sammy Watkins is a shell of the player he used to be and a 32-year-old version of Randall Cobb is diminished, regardless of how much confidence Aaron Rodgers has in him. As for Christian Watson, he missed a significant portion of training camp due to a knee injury and he is far too unpolished to step into a prominent role.

Mims could be an intriguing buy-low target. While there is some concern about what Mike LaFleur would tell his older brother about Mims, a change of scenery could fix things. Mims is still a talented player with injuries, a bad landing spot to open his career and some personal struggles playing a major role in the early disappointment.

For the cost of a late Day 3 pick, Green Bay can bring Mims in for a one-year audition. He’ll add some depth at the position, providing Watson more time to develop, and could blossom into a complementary wideout. If things don’t work out, it cost very little to acquire him.

The Tim Patrick injury changed things for the Denver Broncos. Before the ACL tear this summer, he projected as the No. 2 receiver with Jerry Jeudy thrust into the No. 3 role in the slot. Suddenly, there is now even more emphasis on Jeudy to perform after years of inconsistency and frustration. With Kendall Hinton and Tyrie Cleveland not providing real threats to take snaps, more competition would help the Broncos.

It would be an intriguing landing spot for Mims. The opportunity to catch passes from quarterback Russell Wilson would immediately put him in a position to make a bigger impact. There’s also appeal to joining Nathaniel Hackett’s offense, which should be very friendly to pass-catchers. All things considered, it would be a massive improvement compared to the situation in New York.

The Atlanta Falcons should be interested in every young, intriguing talent that becomes available via trade. This is one of the worst teams in the NFL and the Drake London injury put a bigger spotlight on the lack of proven talent behind him at wideout. If Atlanta is willing to roll the dice on Bryan Edwards, Mims is worth a similar gamble.

As for his role, he could be the No. 4 receiver at the very least. It’s also not like the situation is terrible. Marcus Mariota is showing starting-caliber tools during the preseason and rookie Desmond Ridder is among the most impressive players this summer. If Mims wants an opportunity to simply see the field a lot, regardless of it being a contender or rebuilding team, the Falcons are an intriguing fit.