It’s been a rather eventful offseason for the Dallas Cowboys. Whether it was Amari Cooper getting traded to the Cleveland Browns or Randy Gregory flip flopping and taking his services to Denver, the team has been in the news.

As far as free agency goes, the Cowboys have been busy the last week or so, locking up Michael Gallup, which surprised many due to health concerns. Dante Fowler was also picked up this week as the team continues to navigate the offseason as best it can. While most of the “big names” are off the board now, there are still a handful of free agents that would provide some relief. If nothing else, some solid stop-gap solutions.

With all of that being said, here’s a group of players that can be had in the second and third waves of NFL free agency.

The Cowboys need to address their defensive end slots whether it’s through free agency or the NFL Draft. Even though Gregory only accumulated 9.5 sacks over the last two years, he was a stalwart on the Cowboys’ defensive line. One route that owner Jerry Jones can go is by bringing Pierre-Paul into the fold.

The former All-Pro and two-time Super Bowl champion has likely seen his best days but would still provide a stop-gap solution this season. Considering that Dallas needs to draft offensive linemen, a safety, and possibly a linebacker, Pierre-Paul would give the Cowboys the luxury of targeting a defensive end next year while still mounting a decent enough pass rush.

Statistically speaking, Pierre-Paul has seen his sack numbers steadily decline over the last couple of years, from 9.5 in 2020 to 2.5 last year. Nevertheless, if used as an outside linebacker in Dan Quinn’s defense, Pierre-Paul could still provide a reliable presence. He’s blitzed the quarterback 116 times over those two seasons. He’d also come relatively cheap. Maybe not the flashiest signing, but a necessary one. 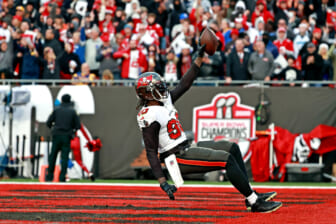 Jadeveon Clowney could be another option for the Dallas Cowboys

Based on production, Clowney would be a more impactful signing than Piere-Paul. The Cowboys cannot allow the defensive end position to go unaddressed following Gregory’s exit. By kicking the tires on Clowney, Dallas would land a three-time Pro Bowler who has totaled nine sacks in the last year, which was almost more than Gregory’s total in the last two seasons.

Even though it appears the Cleveland Browns are trying to hold onto Clowney’s services, the Cowboys could certainly swoop in. Clowney proved to be a remarkable defensive presence in Cleveland. He amassed two pass deflections, two forced fumbles, and 11 tackles for a loss. In addition, Clowney has compiled 121 pressures over the last four seasons — meaning that at age 29, he’d hold down a defensive end slot for a minimum of two to three years while contributing at a high level.

Odell Beckham Jr. could give Dak Prescott another reliable option

Trading away Cooper leaves the Cowboys missing one of, if not, their best receiving option. Cowboys fans will obviously argue over the validity of that statement, but what isn’t up for debate is that Dallas badly needs another receiver. Dak Prescott will need another option to throw besides Gallup and Dalton Schultz, so signing recent Super Bowl champion Odell Beckham would fill that void.

Sports Illustrated recently pointed out that Beckham’s family, including his parents and his closest friends, all reside in Texas, with Dallas among those Texan cities. Beckham’s family wouldn’t likely decide for him, but it’s something worth monitoring.

Despite suffering a torn ACL early on during the Super Bowl, Beckham’s abilities are unquestionable, and he is still largely considered one of the NFL’s best. If Beckham recovers from his injury and whether he’ll continue playing at a high level remains to be seen, but if he can indeed make a full comeback, the Cowboys would be adding a reliable option for Prescott. A trio of Beckham, Gallup, and CeeDee Lamb certainly sounds imposing.