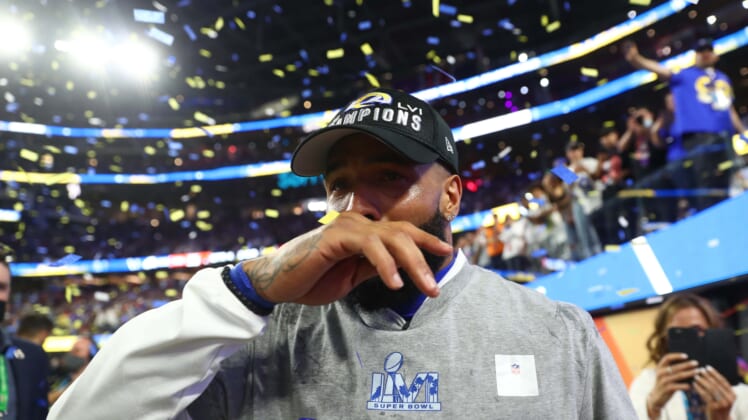 Beckham Jr. went down late in the second quarter. The Rams No. 2 receiver attempted to reach back for a ball thrown behind him, forcing his body to twist. Unfortunately, his left leg planted and twisted awkwardly with Beckham Jr. immediately going down and grabbing the knee. 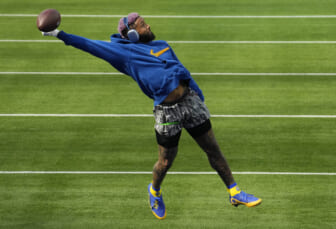 Trainers escorted Beckham Jr. to the sideline and quickly took him into the locker room. Shortly after the halftime break, the team confirmed he wouldn’t return. While the 29-year-old was in positive spirits during Sunday night’s celebration, the prognosis doesn’t look good.

Sports Illustrated’s Albert Breer reported Sunday that the Rams fear Beckham Jr. tore his ACL in the Super Bowl. While the diagnosis isn’t official, the Lachman test can be conducted on the field and it is the most accurate test at detecting an ACL tear.

How will the Odell Beckham Jr injury impact him in free agency?

The injury happened at the worst possible time for OBJ. If he stayed healthy, the star receiver was on pace to lead the Rams in receiving and might have won Super Bowl MVP. Worse yet, the ACL tear happened just weeks before his is set to become a free agent.

Before the injury, Beckham Jr. could have pursued a lucrative contract that would have made him one of the highest-paid wide receivers in the NFL. Instead, he’s looking at a lengthy recovery and this is the second time he tore the ACL in his left knee.

He will likely start the 2022 NFL season behind schedule, likely missing multiple games. Because of it, Beckham Jr. won’t find the caliber of offers he would receive if healthy. While it’s an unfortunate outcome, it might increase the chances of OBJ staying with the Rams.