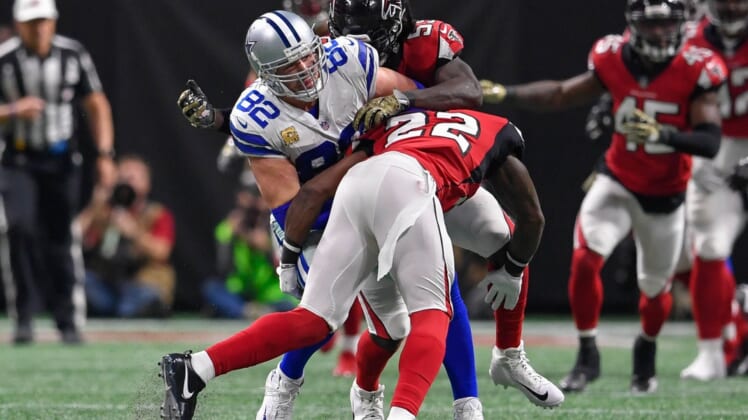 With both the 2021 NFL Draft and free agency feeling more palpable for front offices, it is paramount that the Dallas Cowboys prioritize bolstering their roster on the defensive side of the ball with young playmakers on the backend.

The Cowboys already checked off their biggest offseason priority, signing Dak Prescott to a lucrative four-year $160 million contract extension. Dallas can now redirect its attention to strengthening the secondary, an area of the depth chart that was debilitated all last season to say the least.

The incipient stages of addressing the defense began when America’s Team hired former Atlanta Falcons Head Coach Dan Quinn to assume the role of defensive coordinator. Coming off of a year in which it was unable to force turnovers and defend the pass, Dallas hired Quinn in hopes that he can galvanize a unit that only forced 10 interceptions and ranked in the bottom 10 of passing yards allowed last season.

Considering Quinn’s previous history with the player and a long drought of serviceable play by its secondary, Dallas has become an ideal landing spot for a former first-round draft pick and Pro Bowl safety. Here are four reasons why the Cowboys must pursue Keanu Neal in free agency.

When healthy, the 25-year-old strong safety has proven that he can be a force within a secondary, lining up in the box and imposing his will on ball carriers as well as thumping wide receivers and tight ends coming across the middle.

Selected in the middle of the first round in the 2016 NFL Draft, Neal saw immediate success, being selected to the PFWA’s All Rookie Team. He then built off of his rookie year with a strong sophomore campaign as he was voted into the 2017 NFL Pro Bowl.

Neal’s following two seasons were derailed by injuries with a torn ACL in 2018 and a torn Achilles in 2019 but he bounced back in a huge way, amassing 100 total tackles, nine of which were for a loss in 15 games played last season.

While Neal’s productivity may have declined from his first two seasons in the league, the former first-round draft pick did come off of two surgeries and is still entering the prime of his career. The 2021 free agent ranked as Pro Football Focus’s 33rd-best safety, receiving positive marks as a pass rusher and a 66.2 grade in coverage. But with another full offseason of recovery, the hard-hitting safety can revert back to the old talent that looked so promising as a first and second-year player.

The upside is tremendously high.

Reuniting Dan Quinn with Keanu Neal with the Dallas Cowboys

Some of Neal’s most-productive seasons came under the tutelage of Quinn. In fact, Neal was the first player that the former Atlanta Falcons Head coach selected in the draft back in 2016, the beginning of a season that culminated into a top-10 defense and a Super Bowl appearance for his former team.

The Florida Gators’ product could thrive in a reunion with his former head coach, playing in a regime that would maximize his skillset and allow him to play a traditional strong safety role.

While it is likely that Dallas will let Xavier Woods test free agency, Quinn could shift Donavan Wilson, a player who showed promise down the stretch, to free safety and pair him with Neal. This would make for one of the better tandems that this Cowboys team has seen in the last few years.

How Dallas Cowboys can fit Keanu Neal into their cap space

After restructuring the contracts of three foundational offensive linemen, the Cowboys created $17 million dollars worth of space before the start of the new league year on Wednesday.

Neal is expected to be well within Dallas’ price range this offseason given that they’ve restructured deals to where some players’ contracts will be spread out over the course of four seasons.

Assuming they are not finished restructuring deals and making moves to free up more space, the Cowboys are in a prime position to sign the former pro bowler.

Why improving the Dallas Cowboys secondary is crucial in 2021

As mentioned above, it would behoove Dallas to revive an area of its roster that was devoid and bereft of quality defensive play, especially at corner and safety last season. Neal would easily be one of the better safeties that this team has seen in the past few years.

With his physical style of play, tenacity, and leadership qualities, Neal would quickly establish himself as a leader of the locker room and the defense in ways that are reminiscent of former greats like Demarcus Ware, Darren Woodson, and Roy Williams

While that may be very lofty praise, the former Falcon could fill a gaping hole for a depleted Dallas defense that would still need some major revisions in the offseason.

Given their offensive firepower, there is no doubt that the Cowboys will score points. They’re  success this year will be contingent upon whether or they can make key defensive stops.

And adding Neal into the mix would be the first step.

For more news and analysis on the Dallas Cowboys, check out below.