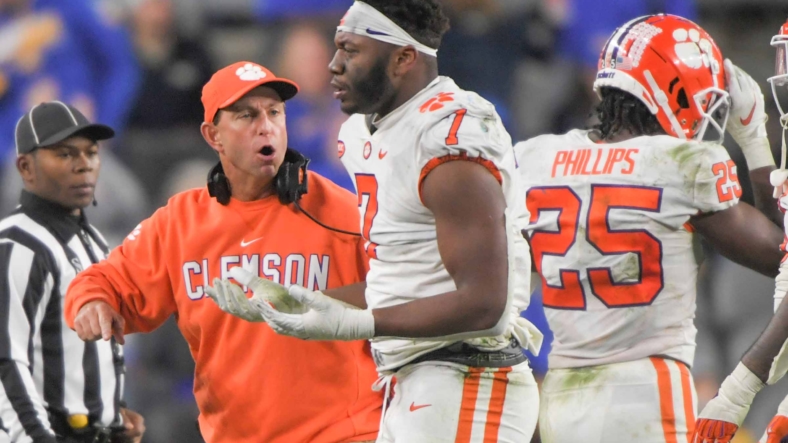 We’re just days away from Week 1 kicking off, putting over 100 college football teams in action, all in the same Labor Day weekend. We recently highlighted five teams set to surprise the college football community in 2022, so it’s only natural for us to come back to the topic, only now we’re focusing on teams who could disappoint their fanbases this season.

The Clemson Tigers are coming off a 10-3 season that included an unexpected loss to North Carolina State a year ago. They hope to do even better in 2022, yet will have to do so without their offensive and defensive coordinators from last season. The biggest change will be the departure of Brent Venables, who accepted a head coaching role with Oklahoma. So, after six seasons of Tony Elliott coordinating the offense, and nine more from Venables on defense, this staff will be under new direction.

Brandon Streeter returns to run the offense, and Wes Goodwin will handle defensive duties. These are big changes for a team hoping to reach the College Football Playoff after falling just short a year ago.

Making matters worse is D.J. Uiagalelei may not ever live up to his status as a former five-star recruit. Throwing more interceptions than touchdown passes is never a good look. While he may be entrenched as the starter for now, freshman five-star recruit Cade Klubnik could force his way onto the field if Uiagalelei struggles again in his junior year. Despite having a talented roster, there’s too much uncertainty to buy into the fourth-ranked team in the nation at this point in the season.

Speaking of change, there’s a whole of that going on in South Bend this year. The Notre Dame Fighting Irish were forced to find a new head coach after Brian Kelly packed his bags to take the vacant LSU job. Now Marcus Freeman gets a chance at the full-time role after being promoted from defensive coordinator.

We’re not worried about the Fighting Irish defense, even after losing Kyle Hamilton. Their offensive line is strong, and Michael Mayer may be one of the best tight ends in the nation. However, we’re not sold on Tyler Buchner just yet. Certainly athletic, Buchner’s arm strength leaves much to be desired, not to mention, his mechanics are a bit unusual. Let’s just say his consistency is a major question mark. That’s not good for a team expecting a lot out of their sophomore QB.

Don’t be surprised if Notre Dame finishes with four or five losses in 2022. With teams such as Ohio State, Clemson, and USC all on the schedule, there’s not much room for error in Freeman’s first season at the helm.

The Michigan Wolverines have come a long way under Jim Harbaugh. Despite an odd offseason where he may have been campaigning to re-join the NFL, Harbaugh’s all in on the Blue heading into 2022. That’s good, because the Wolverines have a lot of talent to replace. Namely Aidan Hutchinson, the No. 2 overall pick in the 2022 NFL Draft, yet David Ojabo’s departure will have arguably just as big of an impact.

Replacing an elite pass-rush duo won’t happen overnight, and that void could have a cascading effect on the second and third levels of the defense.

Not only that, the Wolverines haven’t even decided on a quarterback just yet. In a bit of a strange approach, Cade McNamara will be their Week 1 starter, but J.J. McCarthy will also get a chance to show what he can do, by starting in Week 2. Ultimately McNamara will likely prove to be the choice, but it’s concerning that Harbaugh and the rest of the staff haven’t seen enough from the senior quarterback just yet to make their decision. How long will this yo-yo game last?

Harbaugh feels he has two quarterbacks who can help him win a championship, but what if they ultimately find out they don’t have any QBs capable of bringing home the trophy?

Texas A&M doesn’t live up to the hype

The Texas A&M Aggies earned some recognition this offseason for surprisingly finishing with the top-ranked recruiting class in the nation. But those players won’t make an immediate impact, at least not in 2022. The Aggies may be a team to keep an eye on in the near future, but they’re unlikely to become a powerhouse overnight.

Many are still picking the Aggies to finish better than 8-4 this season, but only five offensive and four defensive players return from a year ago, leaving a lot of turnover. Sure, there’s plenty of room for growth, but there’s also the potential for failure.

Though running back Devon Achane gives them a strong base to work from on offense, concerns at quarterback will determine the fate of their season. Now Haynes King has been announced as the starter to open the season, but he has just 39 career attempts after missing nearly the entire 2021 season with injury.

Is this team really ready to shock the world this year? Count us as early skeptics.

Amazingly, the Utah Utes are seen as the current favorites to win the Pac-12 conference in 2022. This is primarily based on their 10-4 season that concluded with a Rose Bowl appearance, where they lost by just three points to Ohio State, as well as their placement in the AP poll as the seventh-ranked team in the nation.

Two of their top offensive talents return, with quarterback Cameron Rising and running back Tavion Thomas back for another season. We’re not so worried about the offense.

Defensively? That’s an entirely different story. Their leader Devin Lloyd is now in the NFL after becoming a first-round pick, and their sack leader Mike Tafua has also moved onto the pros. How the Utes fill these vacant spots will be crucial to maintaining their success in 2022.

This team has a few potentially tough matchups on the schedule. Starting off with an SEC battle at Florida, the Utes can’t afford to stumble out of the gates. USC and Oregon could both take a big step forward in conference play, and the Utes don’t want to find themselves trying to play catch-up late in the season.