The Cleveland Browns look to avenge their loss to the Kansas City Chiefs in the AFC Divisional Round when the two Super Bowl contenders meet at Arrowhead Stadium in one of Week 1’s biggest games on Sunday. Read on for our full preview, predictions and key matchups to watch in this marquee duel.

Kansas City Chiefs vs Cleveland Browns: What you need to know

There’s a legitimate argument to be made that the Browns have the NFL’s best backfield tandem with Nick Chubb and former Chiefs rushing champion Kareem Hunt. Purely talented as those two ball-carriers are, they also get to run behind a Cleveland offensive line Pro Football Focus ranked No. 1 in the NFL in 2020.

With dubious depth at linebacker, and Chris Jones and Jarran Reed more known for their pass-rushing prowess than run defense, the Chiefs’ front seven has their work cut out to hold their own. Rookie second-round pick Nick Bolton excels as a hard-hitting run defender, but that’s a lot to ask from a first-year player.

Two of the best offenses in the NFL meet in this one. Patrick Mahomes is on track to have one of the best careers in NFL history as long as Andy Reid remains the Chiefs’ head coach, but Baker Mayfield showed in the second half of 2020 why he was worth the No. 1 overall pick, as he thrived in Coach of the Year Kevin Stefanski’s scheme.

Mahomes is almost guaranteed success on any given Sunday. He’s a world-class talent. Only so much can go wrong, particularly with matchup nightmares like Travis Kelce and Tyreek Hill at his disposal. Thanks to the Browns’ elite rushing attack, though, Mayfield has the means to competently duel with his superior counterpart. 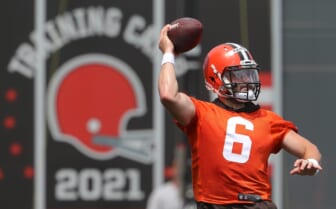 How far will the Browns and Chiefs advance in the postseason? Read our NFL playoff predictions now

While it’ll be fascinating to see how the new-look Chiefs o-line protects Mahomes from Myles Garrett, Jadeveon Clowney and an upgraded Browns defensive front, we’re focusing on a head-to-head duel for the ages beyond the trenches.

Among the most underrated cornerbacks in the game, Denzel Ward is a rare athlete who has the change-of-direction skills and sheer speed to even dream of keeping up with Hill. Although the Browns’ secondary is much improved from 2020 as well, Ward should draw the assignment of marking Hill for most of Sunday’s showdown. 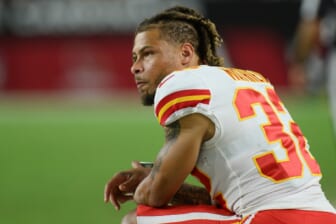 The bottom line: There’s been so much turnover at key positions on both rosters that it’s anyone’s guess as to how this will play out so early on. It could be a playoff preview of sorts. Chances are, the Browns will control possession with their rushing attack, but Mahomes will make some ridiculous plays down the stretch to get Kansas City the win.