The Carolina Panthers quarterback situation is one of the worst in the NFL. Choosing between Sam Darnold and rookie Matt Corral, head coach Matt Rhule is in a difficult spot entering the summer. Unsurprisingly, the Panthers are looking for better options.

Carolina has been connected to the quarterback market throughout the offseason, ranging from rumors of drafting Kenny Pickett with the 6th pick to speculation about a Baker Mayfield trade. While most of the options are now off the board, the Panthers could still pursue Mayfield or Jimmy Garoppolo.

Despite the unfortunate signal-caller situation, Carolina still holds leverage in the situation. The Browns don’t have another trade partner for Mayfield and the organization doesn’t want to roster a disgruntled backup quarterback owed $18 million this season. Meanwhile, the 49ers owe Garoppolo more than $25 million this season to backup Trey Lance.

As training camp approaches, Carolina is taking a deeper look at its current situation at quarterback. On Sunday’s SportsCenter, Jeremy Fowler reported that the Panthers are still looking into Mayfield and Garoppolo.

“The Panthers are still essentially looking for veteran quarterback help, They would like somebody else; that’s why the Baker Mayfield situation, Jimmy Garoppolo might not be completely dead at this point. And so it certainly seems [Sam Darnold] is the favorite to start.”

Either would be an upgrade over Darnold. It would also be an important move given Rhule is squarely on the coaching hot seat this year, likely facing a scenario where not reaching the playoffs gets him fired. It’s why so many eyes in Carolina are on the quarterback position.

Who will be the Panthers starting quarterback in 2022?

While the Panthers have the cap room to absorb Garoppolo or Mayfield’s salary, they are already paying a fully-guaranteed contract to Darnold in 2022. He showed promise early last season, but everything came apart as the year unfolded.

Darnold evidently lost the confidence of the coaching staff, resulting in an exhaustive search to replace him this offseason. For now, he is the most experienced quarterback on the roster and he’s already had time to start learning Ben McAdoo’s playbook.

There’s another factor at play that makes him the favorite to start. Garoppolo is recovering from offseason surgery and won’t be fully cleared to throw until later this summer. Meanwhile, Carolina’s trade talks for Mayfield broke down when the Browns wouldn’t cover most of his contract. Until that changes, he is stuck in Cleveland and that is time Mayfield won’t get back to potentially work with the Panthers.

Ultimately, Darnold would have the edge in a quarterback battle upon the arrival of either Mayfield or Garoppolo. Of course, either veteran could replace him during the regular season.

The Panthers liked Corral enough to trade up and select him with the 94th pick in the 2022 NFL Draft. Sacrificing their 2023 third-round pick in the process, Carolina likes the 23-year-old’s potential. However, it’s not as sold on him being ready to start right away.

“They know Matt Corral is a bit of a project, a little like Malik Willis, because of the offense he came from in Ole Miss. He’s going to need some time to learn the nuances of the NFL game, but they love the talent. So, he could at least make this interesting for sure.”

Beyond the maturity concerns teams had with Corral, scouts also questioned his accuracy and ability to progress through reads. He played in a simplistic offense at Ole Miss, limiting opportunities for him to diagnose coverages and make his own on-field decisions.

There’s likely another factor in play here. While Corral was a dangerous runner at college, he also could be reckless with it at times. For a 205-pound quarterback, looking for contact and not sliding will be a major problem in the NFL.

The best-case scenario for the Panthers would be acquiring Mayfield or Garoppolo at a steep discount and making them the starting quarterback this season. With Darnold serving as the backup, Corral can develop as the No. 3 quarterback without being rushed into game action. 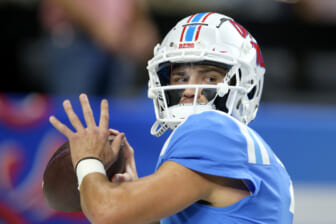