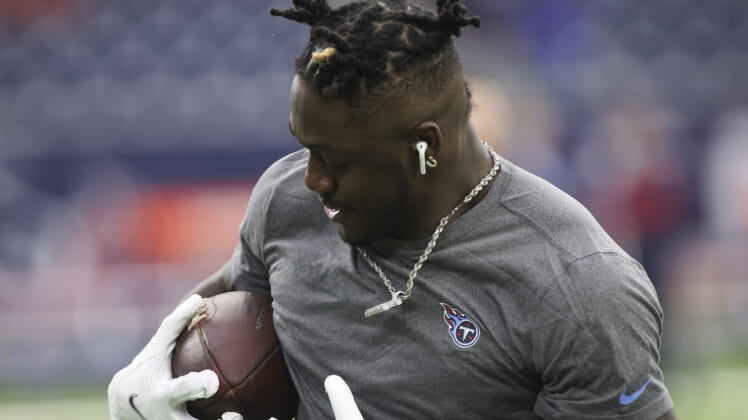 Tennessee Titans wide receiver A.J. Brown started being floated in NFL trade rumors after Davante Adams and Tyreek Hill were moved in blockbuster deals. Fortunately for Ryan Tannehill and Co., it seems Brown will be staying in Tennessee.

Brown, a 2019 second-round pick, is becoming one of the best wide receivers in the NFL. It also means he’ll soon become one of the highest paid NFL players, eligible for free agency in 2023. Thanks to the Christian Kirk contract and other deals, the cost of signing a top receiver is exploding.

It puts the Titans in a similar position the Green Bay Packers and Kansas City Chiefs found themselves in. Given a new deal for Brown will likely cost $24-plus million in average annual value, it would force Tennessee to make difficult financial decisions at other positions.

While that might seemingly cloud Brown’s long-term future with the organization, at least one NFL insider believes a trade isn’t happening anytime soon.

Sports Illustrated’s Albert Breer wrote in a recent mailbag that he believes Brown will play for the Titans in 2022. However, the same can’t be said for Seattle Seahawks receiver D.K. Metcalf.

While there might be some rationale behind trading Brown before the 2022 NFL Draft, allowing Tennessee to address multiple needs with young talent, it’s seemingly not going to happen.

Instead, the Titans will move forward with a receiver duo of Brown and Robert Woods. If Derrick Henry is healthy and the offensive line improves, Tennessee’s offense could be one of the best in the NFL next season. After that, the organization will face some crucial decisions in the 2023 offseason.