Star pass rusher T.J. Watt and his Pittsburgh Steelers are in the midst of a protracted contract stalemate with Week 1 against the Buffalo Bills just a few days away.

Entering his contract year, Watt wants an extension that would likely make him the highest-paid defensive player in NFL history. The two sides seemed to be close to a new deal before recent suggestions concluded that conversations could blow up altogether.

According to Aditi Kinkhabwala of NFL Media, the issue here is that Pittsburgh remains firm in its precedent of not offering fully guaranteed cash outside of Year 1. Given Watt’s importance to the team and the fact that he’s been among the most-dominant EDGE rushers in the NFL since entering the league back in 2017, this makes no real sense.

Could we be looking at a situation similar to what happened between the Steelers and Le’Veon Bell years back? At this point, it seems likely. And while it might not make sense for Pittsburgh to entertain trade offers for T.J. Watt, the drama could lead us to that point. If so, here’s a look at five ideal trade scenarios for the three-time Pro Bowler.

Much like his older brother J.J. in Arizona, Watt can play in both a 3-4 and 4-3 defensive scheme. With the Steelers, he’s primarily been hands-up as an outside linebacker. That wouldn’t be the case with Philadelphia. Scheme fit is obviously an important backdrop when looking at potential fits. That’s not an issue with Watt.

From an on-field fit, Philadelphia could use that elite-level edge pass-rush guy. Former first-round pick Derek Barnett has not panned out too well. Brandon Graham is getting up there in age. Adding Watt to the mix for the bounty mentioned above would make sense. It also helps that Philly could have as many as three first-round picks in the 2022 NFL Draft. Sending two of them to Pittsburgh could work.

Just imagine the Watt brothers teaming up together in Arizona. Some thought that might have happened with the Steelers after the Houston Texans moved on from J.J. this past offseason. Obviously, it never came to fruition.

Click here to find out where T.J. Watt sits in our NFL Top 100

A first-round pick back in 2017, the younger Watt has tallied 111 quarterback hits and 49.5 sacks in four NFL seasons. Meanwhile, the older Watt has earned three NFL Defensive Player of the Year awards. In return, Pittsburgh acquires a short-term option to replace Watt in that of Jones. It then picks up a slot receiver to team up with JuJu Smith-Schuster as well as three valuable future draft picks. That’s quite the haul.

Talk about a blockbuster trade that would work for both sides. Sure Pittsburgh would likely love to add more draft capital if it were forced to move Watt, but bringing in two starter-caliber defenders as well as a couple picks might make sense. Wilkins is a perfect fit in the Steelers’ 3-4 defensive scheme. Howard could team up with fellow former Dolphins player Minkah Fitzpatrick to form an elite pairing in the defensive secondary.

As for Miami, the team seems to be missing a truly elite edge pass rusher for defensive-minded head coach Brian Flores. It also has a surplus of corners with Howard and Byron Jones being among the highest-paid players at that position in the NFL. Add in an extra first-round pick in the 2023 NFL Draft stemming from the blockbuster trade with the San Francisco 49ers, and these Dolphins have the assets to make a move of this ilk.

Let’s get real crazy. One of the top young corners in the NFL, Alexander is yet another player looking for a new contract. Whether that happens in Green Bay remains to be seen. What we do know is that embattled general manager Brian Gutekunst has had his issues with star players. Perhaps, moving off Alexander and a future first-round pick to find an upgrade over Smith out on the edge could make sense. 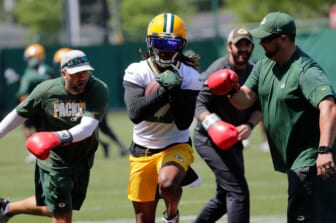 From Pittsburgh’s perspective, this might be the best it could hope for if general manager Kevin Colbert is forced to trade Watt. Just 24 years old, Alexander is coming off his first Pro Bowl appearance after yielding a sub 70 passer rating when targeted in 2020. Meanwhile, Smith seems to be a perfect fit in Pittsburgh’s 3-4 scheme. He’s registered 85 quarterback hits and 34.5 sacks over the past three seasons.

It’s been a while since Jerry Jones and America’s Team made a move of this ilk. In the past, Jerry had been willing to give up future draft capital for win-now players. That could very well come to light with his Cowboys on verge of playoff contention heading into 2021. The idea of Watt teaming up with Demarcus Lawrence on the Boys’ defensive line might be too hard for Jones and Co. to pass up on.

From Pittsburgh’s perspective, it’s simple. The team adds two young skill-position players to move forward with. Just 25, Gallup is averaging nearly 1,000 receiving yards the past two seasons. Pollard would be a great complement to rookie first-round pick Najee Harris at running back. Meanwhile, Colbert and Co. add four valuable future picks to the mix to help build with moving forward. Perhaps, those assets could be used to find an heir-apparent to Ben Roethlisberger.