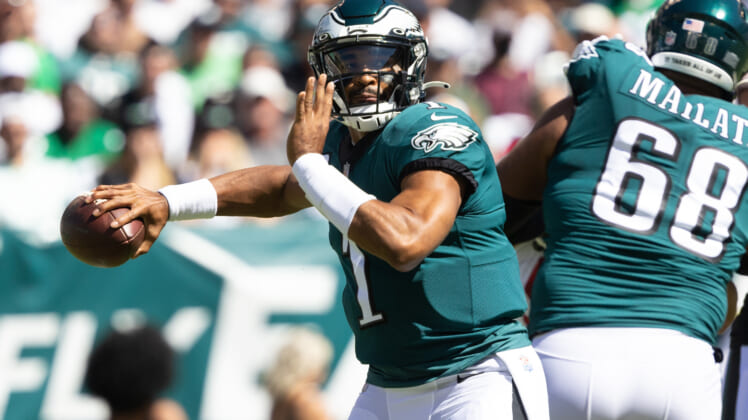 The NFL’s wild Week 1 carried over into perhaps an even wilder Week 2.

Eight of the 16 games in Week 2 ended with a one-score margin, while three of those matches were separated by only one point. On the flip side, Week 2 also brought the league’s first shutout of the season with the Miami Dolphins failing to score against the Buffalo Bills, who managed to post 35.

Here are some of the wilder Week 2 NFL stats from across the league.

Philadelphia Eagles quarterback Jalen Hurts pulled out a win in Week 1. However, he had the lowest average depth of target (3.6) among qualified players. Furthermore, per NFL Next Gen Stats, 14 of his 35 total attempts were at or behind the line of scrimmage.

The Eagles flipped the script against the San Francisco 49ers. Hurts boasted the highest average depth of target in Week 2, targeting receivers an average of 15.7 yards downfield. That was by far the biggest week-to-week jump in the NFL.

With two polar opposite performances, I pity Dallas Cowboys defensive coordinator Dan Quinn, who has to gameplan for the Eagles for Week 3 on Monday night. With such a small sample size varying widely, Dallas must prepare for different offenses.

Last year’s rushing title winner had fans and fantasy managers worried after his lackluster start in Week 1. But Derrick Henry returned to form against the Seattle Seahawks on Sunday.

The running back put up 182 total rushing yards in Week 2. More impressively, 160 of those yards came after contact, according to Pro Football Focus. To put that in perspective, the next leading rusher on Sunday (Dalvin Cook) had 130 total rushing yards.

Henry’s performance was slightly unexpected, not only because of his 58-yard rushing performance last week, but also because he got off to a slow start against the Seahawks.

He had 35 rushing yards on 13 attempts in the first half, where his longest run went for just eight yards.

The tables turned in the second half and overtime, however. Henry had 147 combined rushing yards the rest of the day on 22 attempts (6.8 ypc).

Perhaps an important additional note for Henry’s fantasy managers: The running back set career highs in targets (six) and catches (six). As Tennessee’s offensive line struggles to get push, perhaps the team will lean on him more as a pass-catcher this season.

Los Angeles Chargers cornerback Asante Samuel Jr. showed out in his second career game.  He joined fellow rookies Patrick Surtain II and Jaycee Horn of the Carolina Panthers with their first interceptions. But more than that, he was one of only eight defensive players across the entire NFL to record two pass breakups.

All-in-all, it was a good day for Samuel Jr. Per PFF, he allowed an NFL passer rating of 63.9 when targeted. That was the fourth-best rate among rookie cornerbacks and 28th among 104 qualifying cornerbacks across the league.

But perhaps most importantly for Thanksgiving dinner this year, Samuel Jr. beat out his father Asante Samuel in how long it took for him to secure his first NFL interception.

It took Samuel Sr. until his third career game in 2003 to snag his first pick. Granted, he returned that interception for a touchdown, but Jr. is technically outpacing his father thus far in the INT column.

There’s an oft-used expression in football that perhaps applies better to the Baltimore Ravens than any other team in the league: You live by the blitz, you die by the blitz.

In Week 1, the Ravens died by the blitz, allowing a game-winning touchdown – and plenty of other first down conversions – using Cover 0 blitzes against the Las Vegas Raiders. And that wasn’t a new strategy for the team, as it was the blitz-happiest defense in the NFL last season, blitzing 44.1% of pass plays.

But against the Kansas City Chiefs in Week 2, Baltimore flipped the script.

According to Next Gen Stats, the Ravens blitzed just 12.9% of passing plays against the Chiefs, which was the lowest rate for the team in a single game since Don Martindale took charge of the defense in 2018.

It made sense given the competition.

Last season, Patrick Mahomes boasted a passer rating of 129.4 when blitzed, versus a rating of 98.7 when not blitzed, per PFF. He’s a complete anomaly in this sense, as even quarterbacks famously good against the blitz – like Tom Brady, Aaron Rodgers and Russell Wilson – are worse against the blitz than without it.

Baltimore’s defensive adjustments seemed to work, and helped lead to a thrilling underdog win against the defending AFC champions. It also netted quarterback Lamar Jackson his first career win against the Chiefs in his fourth game against the franchise.