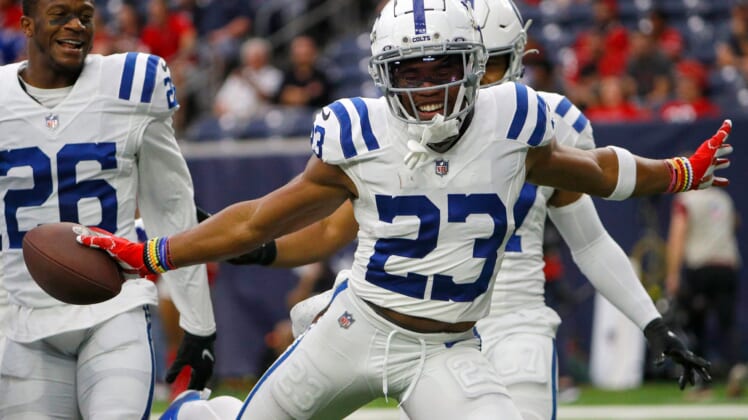 The Indianapolis Colts had no issues committing $10 million per season to All-Pro cornerback Stephon Gilmore this offseason, but now their other Pro Bowl corner may be upset. Despite being one of the best slot cornerbacks in football, could a Kenny Moore trade be on the horizon?

The 26-year-old defensive back is holding out of Colts Organized Team Activities as he aims for a new contract and after leading the secondary in snaps played and interceptions, he’s not in the wrong for wanting to receive a bigger payday.

Unless the Colts pony up and offer Moore a larger salary, it’s possible the team will face a situation where trading their talented corner is the best move. Here are three ideal trade destinations for Kenny Moore that we could see play out later this offseason.

New Chicago Bears head coach Matt Eberflus is familiar with Kenny Moore II from his four seasons coordinating the Colts defense. Moore reached the Pro Bowl in his final season with Eberflus and would likely welcome the opportunity to play within his scheme once again.

The Bears don’t currently have an established nickel corner, and Moore happens to be one of the best. There’s a case to be made that the Bears shouldn’t be looking to trade for players who are not elite or complete game-changers as they enter a season full of questions, but if Eberflus already knows Moore is a strong fit, parting with a Day 2 draft selection might be worth the price.

Kansas City Chiefs spend some of their savings on Kenny Moore

After trading Tyreek Hill, the Kansas City Chiefs freed up a large amount of future cap space. They could spend it in a multitude of ways, but considering Patrick Mahomes is a boss offensively, maybe they want to continue adding more pieces to the defense.

One player who might be available is Kenny Moore, a veteran who’s at the height of his career and likely is looking to win now. He might even have some room for growth. Chances are he’d immediately be their best corner. Either way, he’d help get Trent McDuffie acclimated in his first season. The potential upside that comes with a Kenny Moore trade has to be enticing for a team who is a constant Super Bowl threat such as the Chiefs.

The San Francisco 49ers allowed last year’s slot corner K’Waun Williams to walk in free agency and never truly replaced him. Charvarius Ward was brought in, but he’s expected to start outside, which leaves room for a new nickel back.

As we’ve seen all too frequently, a team can never have too many capable corners and as of now, the 49ers could use some proven depth to go with Ambry Thomas and Jason Verrett, who’s suffered several injuries of his own over the years.

Moore could step into Willams’ cleats as San Fran’s third corner, bolstering an already strong unit. Acquiring Moore wouldn’t come at a great cost, and considering the Niners still have Jimmy Garoppolo to trade, the outgoing compensation for Moore might actually be less expensive than what Jimmy G returns. It just might be one of those moves that pays off in a big way come playoff time.