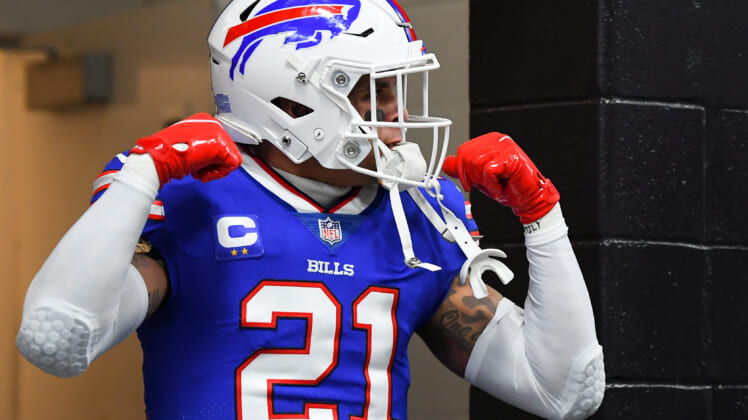 It may have taken him a few years to get here, but Buffalo Bills safety Jordan Poyer is one of the best players at his position in the NFL.

As a leader in the Bills’ secondary, Poyer’s been a big part of Buffalo’s defensive success over the past few seasons. This past year, the Bills had the No. 1 defensive unit in football, and Poyer’s All-Pro effort was a big reason why.

Now, entering his sixth season as a starter with the team, Poyer is seeking a larger payday, or at least some more longterm financial security. Poyer’s current deal is set to expire at the conclusion of the 2022-23 season, but he’s made it clear that Buffalo is the place he wants to be. The team has recriprocated his feelings, yet no new contract agreement has been reached.

With Poyer skipping out on voluntary Organized Team Activities (OTAs) in hopes of landing a new contract, all sorts of rumors could pop up.

If push comes to shove, could we see the Bills part with Poyer ahead of the Week 1 season opener against the Los Angeles Rams? Bills mafia won’t like it, but here are three trade scenarios for Buffalo to trade Poyer.

Like the Buffalo Bills, the Las Vegas Raiders are all-in this season. They’ve added impact players on both sided of the ball, but one of their investments over the past few years has yet to pan out.

Johnathan Abram was the 27th pick in the 2019 NFL Draft, but he’s failed to live up to his high expectations in his three seasons with the Raiders. He likely doesn’t hold much trade value, but the Bills could be willing to take a chance on a defender who once was heralded as potentially a top player at his position.

The Raiders still hold their first four selections in the 2023 NFL Draft, and those could work as sweeteners to make a trade possible. They’d have to clear more cap space and get Poyer signed long-term, but he could be the final piece to their puzzle.

The Dallas Cowboys are always looking to add more All-Pro talent to their roster, and while Jayron Kearse and Malik Hooker were stellar last season, they’re not capable of playing to the level of Poyer.

Either Hooker or Kearse could be used as the starter in trade talks, as the Bills would likely seek a replacement if a Poyer trade were considered. Neither player should be considered untradeable, yet Poyer would be a massive improvement in coverage over what the Cowboys currently have.

Poyer is a safety who can do it all, but his best work comes in pass coverage, where he graded at 89.2 across 574 snaps in coverage according to Pro Football Focus in 2021. With Trevon Diggs doing his work as a ballhawk and Poyer holding down his zones, the Cowboys’ pass D would take a major step forward.

The biggest reason why a Jordan Poyer trade is unlikely is because of the current state of the Bills. He wants to win a ring, they want to win a ring. Staying in Buffalo is his best chance to accomplish his goals, and Poyer knows this.

Yet, if negotiations get nasty and a trade is the only way to make everyone happy, the Bills could look to the Cincinnati Bengals, who are going through a similar situation with their star safety, Jessie Bates III. Like Poyer, he’s unhappy with his contract status, only he doesn’t want to play on the franchise tag, meaning whoever trades for him will be signing the talented defender to a new contract.

If the Bills somehow find themselves in a situation where they have to trade Poyer, the Bengals are likely their best trade partner, thanks to Bates. Better chances say the Bills will find a way to keep Poyer happy, whether that’s a new contract just before the regular season opens remains to be seen.

Related: How a Jessie Bates trade to the Philadelphia Eagles might look