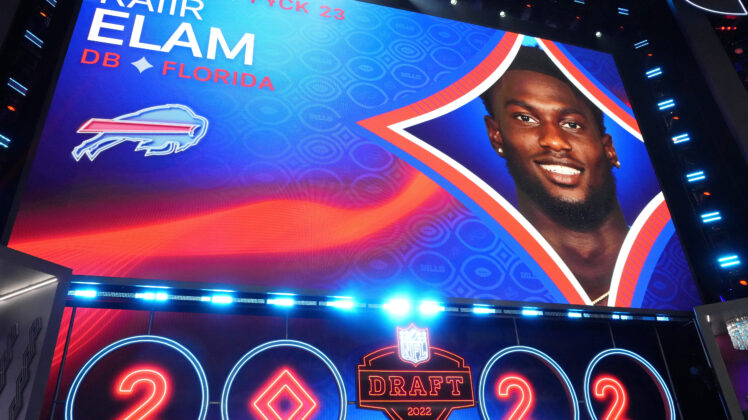 The Buffalo Bills were thrilled to find Florida cornerback Kaiir Elam still on the clock as their draft position neared at pick No. 25 on Thursday night of the 2022 NFL Draft.

Yet, one can never be too sure, leading general manager Brandon Beane to swing a trade with the Baltimore Ravens, moving up two spots to No. 23 to secure their guy. To do so, the Bills also coughed up the 130th pick to make it happen.

On Friday in their first chance to comment about the pick, the Bills noted Elam was their last remaining player on their draft board with a first-round grade, prompting the move up.

“We had a good grade on Kaiir and we were down to one player in the first round on our board,” Beane said. “At that point it just made sense. Not sure what those teams would have taken but there was a lot of trade action going on too. … I was worried more about someone else trading in in front of us knowing that a lot of people had us pegged for potentially as a corner.”

Brandon Beane on trading up for Kaiir Elam

Put the playbook on the plane

They were clearly anxious to make sure Elam didn’t get snatched up elsewhere, but the best part of the ordeal was the phone call in which the Bills let the 20-year-old prospect know he was about to enter the NFL as a first-round pick.

As if it wasn’t clear from the audio, Elam can’t wait to get his NFL career started, looking to dive into his playbook right away. That’s exactly what you want to hear from the newest member of your team. This kid gets it.