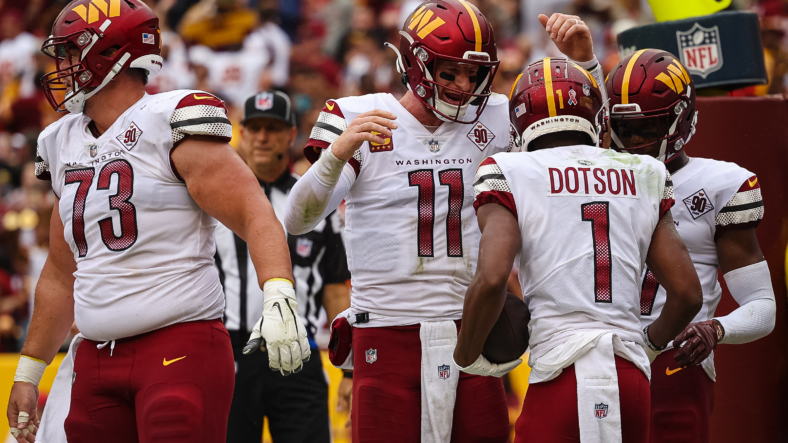 Washington found itself up 14-3 over the Jacksonville Jaguars at halftime. It then let Jacksonville score nine unanswered points in the third quarter to set the stage for the final stanza.

Down 22-14 after a James Robinson touchdown run with just under 12 minutes remaining in the fourth quarter, Wentz and his Commanders worked their magic. That included Wentz leading Washington two long touchdown-scoring drives of 78 yards and 90 yards, respectively. The dude was on absolute fire to close things out for Washington. That included Wentz hitting rookie wide receiver Jahan Dotson for the game-winning score in what ended up being a 28-22 victory.

All said, Wentz completed 8-of-12 passes for 134 yards and two touchdowns in those final two drives to end the game. Just amazing.

As noted above, Wentz threw two interceptions in his Commanders debut. They came on consecutive possessions in the second half and resulted in Jacksonville scoring 10 points to seemingly take control of the game.

Unlike what we saw over the past two seasons with the Philadelphia Eagles and Indianapolis Colts, Wentz was able to overcome these mistakes instead of seeing everything go downhill.

Following the win, Commanders head coach Ron Rivera indicated that the team has “moxie.” He also pointed to the three turnovers and noted that it can’t happen moving forward. Obviously, some of that focus was on the two interceptions Wentz threw in the second half.

Outside of those two picks, Wentz found a way to get all of his playmakers involved. Embattled running back Antonio Gibson caught 7-of-8 targets for 72 yards. Terry McLaurin caught a 49-yard touchdown pass. As for Dotson, he had two touchdown on three catches. In particular, Rivera talked about the first-round pick’s performance in his regular-season debut.

This should rectify itself to an extent once star edge rusher Chase Young returns from injury. Being able to get consistent pressure on the quarterback will help the Washington Commanders’ secondary moving forward.

Despite all the good feelings in Washington right now, it must be noted that the team merely held court at home against a bad Jaguars team. It isn’t necessarily a sign of things to come.

But with a game coming up against the Detroit Lions next week, a 2-0 start to the campaign is now seen as likely. After the offseason of drama in D.C., that has to be seen as a good thing.