Washington Commanders’ Antonio Gibson: I feel like I am one of the best running backs in the league 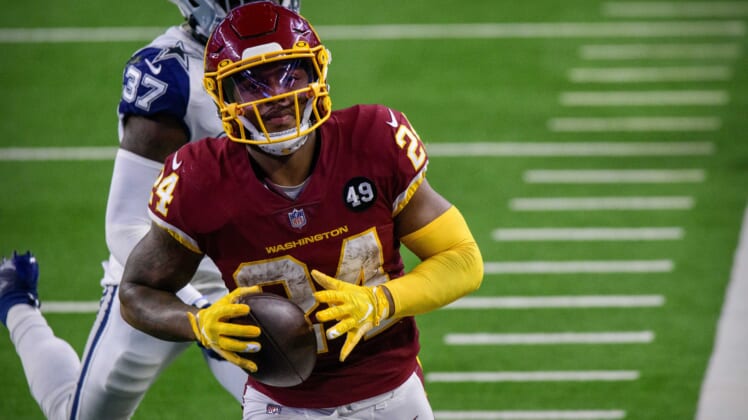 Washington Commanders running back Antonio Gibson was benched in favor of rookie third-round pick Brian Robinson during the preseason. It sure looked like Gibson would be relegated to backup and special teams duties due to some major fumble issues.

That changed when Robinson became a victim of a shooting during a carjacking in Washington D.C. following the Commanders’ preseason finale. While all reports surrounding Robinson are good, there’s no telling when he’s going to return to the field.

On the field, this puts Washington in an unenviable situation. Sure we should be focusing more on Robinson and his recovery from being shot. But Week 1 against the Jacksonville Jaguars is just a few days away. The team must plan accordingly.

In talking to the media on Wednesday, Gibson displayed the very same confidence that made him a breakout player for Washington as a sophomore in 2021.

“I still feel like I’m one of the best running backs in the league and I got something to prove,” Antonio Gibson to reporters on Wednesday.

There’s absolutely nothing wrong with that belief. It shows confidence in his abilities. Primarily, Gibson’s issues have been fumbles. He put the ball on the turf six times last year and fumbled again in Washington’s preseason opener. It’s not something that the Commanders’ brass is going to have patience with.

Related: Washington Commanders to rely on Carson Wentz in more ways than one to open season

With Robinson out for the foreseeable future, it stands to reason that Washington will rely on Gibson to provide balance for new quarterback Carson Wentz. J.D. McKissic is more of a three-down back. Jonathan Williams has not proven to be anything more than a depth option throughout his career in the NFL.

As for Gibson, he jumped on to the scene for Washington after making the transition from wide receiver following a tremendous collegiate career with Memphis. The former third-round pick put up north of 1,000 total yards and 11 touchdowns as a rookie in 2020 before taking his game to the next level last season.

The biggest issues last season included putting the ball on the turf. Gibson fumbled it six times on 300 touches after fumbling it just one time as a rookie the previous season.

Washington opens up its regular season slate against the Jacksonville Jaguars Sunday afternoon. It’s a good matchup for Gibson in that the Jags gave up north of 2,200 total yards and 18 touchdowns to running backs a season ago. With that said, continued fumble issues will have Gibson riding the pine early and often under hard-nosed head coach Ron Rivera.