As Jacksonville Jaguars training camp draws closer, the spotlight will be on the franchise more than ever before. While Urban Meyer and Tim Tebow are generating plenty of interest, fans are even more excited about franchise quarterback Trevor Lawrence.

Lawrence, the No. 1 pick in the 2021 NFL Draft, got off to a slow start this offseason. He suffered a hamstring injury that sidelined him for minicamp and it took longer than expected to sign his rookie contract. But finally, there is good news for the Jaguars.

During an appearance on SportsCenter, ESPN NFL insider Dan Graziano provided a promising update on Lawrence’s availability for training camp.

“He’s going to be fine, from what I understand, to start training camp. The issue is, of course, he just hasn’t had as much time on task as he would like to have at this point. What he’s shown has impressed the Jaguars. It’s going to be a race for Trevor Lawrence to learn as much as he can about the offense and be as ready to go as possible for Week 1.”

Jacksonville has obviously played it safe with the face of the franchise. Lawrence spent much of minicamp sidelined with the intent of giving him enough time to heal. While it will allow the rookie to participate fully at the start of training camp, it also comes at a cost.

Lawrence won’t have the practice reps in offensive coordinator Darrell Bevell’s offense that other rookies have around the league. New York Jets quarterback Zach Wilson and Chicago Bearss rookie Justin Fields both made strong impressions on players and coaches, all while learning their schemes.

It’s going to make the preseason even more crucial for the Jaguars’ quarterback. While he has had time to study the playbook, implementing it in practices and game situations is another challenge. 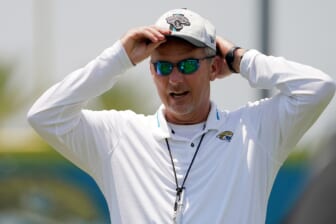 Fortunately, it’s a small hurdle that shouldn’t prevent him from opening the season as the starting quarterback. He might struggle early, making adjustments to NFL speed, but Lawrence was a generational talent for a reason and it shouldn’t take long before we see his skills on display.