Pittsburgh Steelers superstar T.J. Watt is among the NFL’s elite defenders and could well be the highest-paid defensive player on his next contract, but the first-team All-Pro shut down any talk of his new deal in speaking to the media on Tuesday, per NFL Network’s Aditi Kinkhabwala:

Watt may feel a sense of loyalty to the Steelers, since they drafted him 30th overall in 2017 after so many other teams passed on him. Despite that fact and Pittsburgh’s rich franchise history, he should absolutely explore his options elsewhere, provided he hits unrestricted free agency in 2022 and doesn’t sign a new deal before then.

It’s probably blasphemy to suggest to anyone outside of the Steel City that Watt won’t re-sign with the Steelers straight away. Heck, Watt himself may already be locked into that line of thinking, because as Kinkhabwala implied, part of Pittsburgh’s decision to let Bud Dupree walk to Tennessee in free agency was due to Watt’s looming extension.

Having said all of that, it’s in Watt’s best interest to become a true free agent if he can help it — and by that, we’re operating under the assumption that Pittsburgh won’t franchise tag him.

By committing to Ben Roethlisberger wholeheartedly for 2021, the Steelers are doing themselves something of a disservice. Yes, there’s an outside chance Big Ben has a resurgent final year and Pittsburgh competes for a championship.

Alas, more likely than not, it’s going to be a struggle.

You can almost always count on the Steelers’ vaunted defense to show up, and Watt is a huge reason for that. However, their current succession plan for Roethlisberger features Mason Rudolph and the immature 2019 first-round pick Dwayne Haskins. 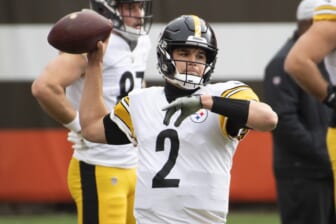 That’s not exactly a great depth chart, especially considering elsewhere in the AFC North, Cleveland has an ascending QB in Baker Mayfield, Baltimore has an MVP in Lamar Jackson, and Cincinnati is led by 2020 No. 1 overall pick Joe Burrow.

Sure, general manager Kevin Colbert could always trade a bunch of future draft picks for an established veteran QB to take Roethlisberger’s place. Or, he can hope that Rudolph can competently compete with an improved Haskins in a training camp competition.

But do any of those avenues sound promising and lined with certainty? Not at all. Watt has to at least consider that as he mulls a long-term commitment to Pittsburgh.

In addition to Roethlisberger’s likely retirement and Haskins’ status as a restricted free agent muddying the quarterback situation, more key Steelers are hitting the open market after this coming season.

You can absolutely assume Watt will be Pittsburgh’s top priority. However, giving Watt such a huge payday means making sacrifices elsewhere, and leaning heavily on the draft to fill holes. It also means multiple proven players are liable to be shown the door.

Longtime guard David DeCastro may be gone off an already-suspect offensive line. Wide receivers JuJu Smith-Schuster and James Washington will be free to sign elsewhere, leaving the offense in even greater doubt. 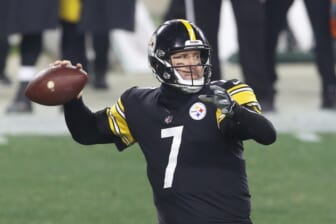 A thin secondary may take even more hits with the possible losses of cornerback Joe Haden and Terrell Edmunds.

If things go according to plan in 2021 and the Steelers do contend for the playoffs, they’re going to be out of range to draft a surefire impact player at the top of their incoming draft class. Colbert would need to hit big on each of his top two or three picks to avoid a steep drop-off at key positions.

There would be enough veterans on defense for Pittsburgh not to take a huge step back on that side of the ball, but Watt is obviously the biggest piece to the puzzle.

Would Pittsburgh Steelers, T.J. Watt benefit from a tag-and-trade scenario?

You can bet there’s at least one team, if not more, who’d be willing to part with a couple first-round picks in exchange for Watt, with the presumption that they’d make him the highest-paid defender in football after the trade. This is definitely analogous to the blockbuster deal that sent Khalil Mack to the Chicago Bears.

The Steelers don’t have a clear path forward at quarterback and are in danger of losing lots of key pieces in 2022. That’s why they’re slated to have the second-most cap space in the NFL. Although Watt is an undeniable game-breaker on defense, he’s also their best chance to yield a huge trade haul to help them control their destiny in picking a long-term Roethlisberger successor.

It’s hard to imagine Pittsburgh or its fans talking themselves into this one, but the franchise’s best long-term interests are in mind here. You wouldn’t have thought Mack could ever be traded. That happened, though. 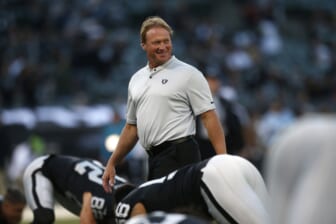 If Watt does want to make it work with the Steelers and play for them his entire career, he should do all he can to get assurances that they have a viable quarterback plan going forward, and structure his massive contract to accommodate whatever that plan entails.

The point is, Watt should look before he leaps into a new contract in Pittsburgh that might be exciting in the near term, but without the right quarterback to captain the offense, could bring about lots of regret.