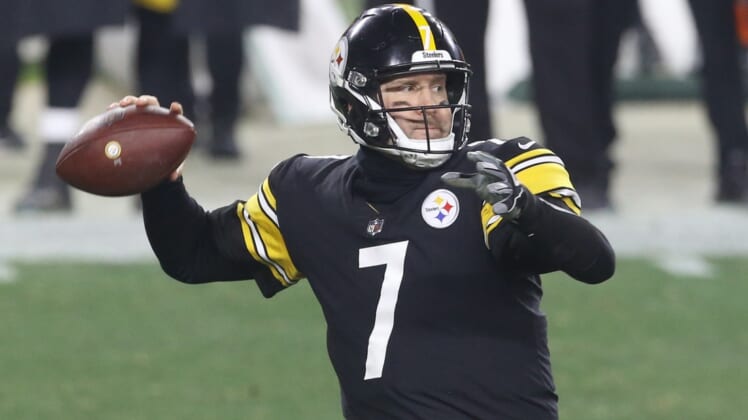 Quarterback Ben Roethlisberger signed a restructured contract Thursday to return to the Pittsburgh Steelers for the 2021 season.

The Steelers and Roethlisberger worked to reduce his NFL-high salary cap number for 2021 of $41.25 million, but terms of the new deal weren’t immediately known.

Multiple reports Thursday indicate the pay reduction is significant and eliminated a $15 million roster bonus due later this month. Roethlisberger turned 39 on March 2.

“We are excited we were able to come to an agreement with Ben Roethlisberger on a new contract for him to return to the Steelers in 2021,” Steelers vice president and general manager Kevin Colbert said in a team-issued statement Thursday. “We know that Ben can still play at a high level and do special things for this team. Our goal remains the same — to put together a roster that will compete for another championship. We are happy that Ben will be one of our leaders to help us accomplish that goal.”

Roethlisberger’s 18th season with the team will allow him to add to franchise records, including 233 career starts. He returned in 2020 from a season-ending elbow injury that required surgery in 2019 and led the Steelers to the playoffs despite sputtering in December.

After an 11-0 start with 25 touchdown passes, Roethlisberger had eight touchdowns and four interceptions in the final four games, sitting out the regular-season finale against the Browns.

“It is my greatest honor to be a Pittsburgh Steeler and give my all for this organization,” Roethlisberger said in a statement. “I am grateful to be at this stage of my career and more than happy to adjust my contract in a way that best helps the team to address other players who are so vital to our success. I love this game and love to compete, and I believe in this team and my ability to deliver when called upon. It all starts with great preparation and I am ready to go.”

Even with Roethlisberger back, big changes are in store for the roster. Center Maurkice Pouncey retired and the Steelers have four offensive line regulars ticketed for free agency. Running back James Conner is not expected to return in free agency and wide receiver JuJu Smith-Schuster is also headed for the open market.

Smith-Schuster has been considered a possible candidate for the franchise tag.