Tim Tebow is back in the NFL, signing with the Jacksonville Jaguars and reuniting with Urban Meyer in what both sides hope will be a successful return to pro football. But while many in Florida are optimistic, the rest of the league isn’t nearly as optimistic.

When the Jaguars hired Meyer, many joked that it could mean Tebow would get a second chance in the NFL. A few months later, just hours before the 2021 NFL Draft, news broke that scenario might become reality. Sure enough, Tebow worked out for Jacksonville and the two sides started discussing a contract.

Despite some in the organization expressing their disapproval, the Jaguars signed Tebow to a one-year contract. While the deal doesn’t come with any guaranteed money and he is the last player on the 90-man roster, the NFL world had strong reactions to the signing.

As Tebow prepares for his first minicamp since 2015 and a position switch in his age-33 season, it seems no one around the league believes this will work out.

“I can’t find anyone who thinks it’ll work. He ran a 4.71 40-yard dash at the combine 11 years ago, which is a middling number for a tight end, and really lacks the height and length that you’d want at the position (Tebow’s 6′ 2″, whereas 16 of 20 tight ends at the 2020 combine were 6′ 3” or taller). And that’s without getting to the fact that last week was the first time he’d been so much as in a football practice in nearly six years, or that tight end is one of the most physically and mentally challenging position to learn on an NFL field. For all those reasons, guys who worked with Tebow come back to a simple question: What’s the upside? “

The sentiment is understandable. We haven’t seen Tebow take an NFL snap in years and he last made a 53-man roster in 2012 as a gadget player for the New York Jets. He’s also making the switch to a spot that requires him to either be a reliable weapon or an adequate blocker. Quite frankly, he never demonstrated that ability in college or the NFL. 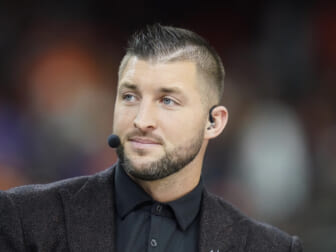 Even when he was an NFL quarterback, Tebow wasn’t a great runner. He averaged just 3.2 yards per carry in his final season.

Ultimately, those projecting Tebow doesn’t make the Jaguars’ roster for Week 1 are probably right. He will stick around for training camp and the preseason, taking some of the pressure and spotlight away from Trevor Lawrence as he prepares to become the face of this franchise and learns a new offense.

But Tebow will generate excitement in Jacksonville, leading to revenue that this team wouldn’t see if they didn’t sign him. For only $920,000, the Jaguars brought in a player who will make them millions.