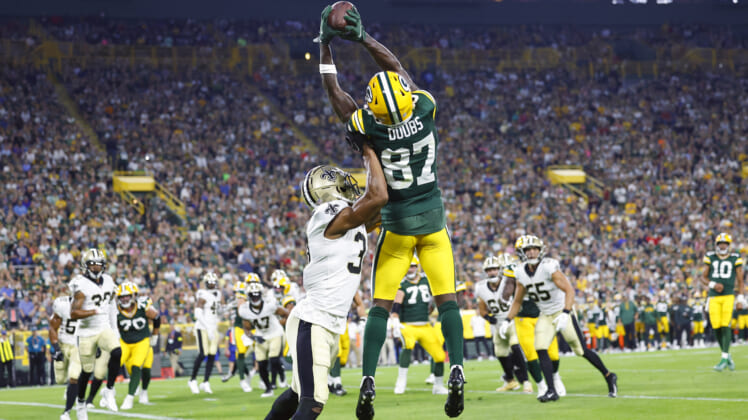 Friday night delivered a classic matchup between the New Orleans Saints and Green Bay Packers. Only, the characters we’ve come to expect in these showdowns were nowhere to be seen in Week 2 of the preseason.

With both the Saints and Packers ramping up for regular season play, tonight was all about the backups, getting a chance to see who’s equipped to make the roster and who will have to keep working at their craft.

Both teams had their ups and downs, but some players stuck out more than others. Let’s dive into the three biggest takeaways from Friday night’s action.

We saw a textbook connection from Jordan Love to fourth-round rookie Romeo Doubs in the second quarter. That’s what you need to see right away.

Was that Aaron Rodgers to Davante Adams or Jordan Love to Romeo Doubs?

It’s noticeable as Rodgers recently called out the non-veterans on the roster, likely an attempt to create a spark. Doubs clearly took notice. Love and Doubs also connected on a 17-yard reception earlier in the game, but the touchdown will have everyone in Packerland talking about the impressive rook.

There was an awkward jump ball earlier in the second quarter that Doubs had trouble adjusting to, and it could be called a drop. Aside from that, Doubs handled his second preseason game well. He also had three catches for 45 yards and a touchdown in his debut last week. If this is a preview of what to expect out of Doubs, the Packers have to like what they see.

The Packers allowed Jordan Love to play into the fourth quarter, giving him a chance to get comfortable. Unfortunately, there are many moving parts in a preseason game, and the third-year pro never really settled in.

While it’s not hard to see some of the traits that led to Love being a first-round selection back in 2020, he hasn’t shown enough consistency for any team to give him a chance to become a starter, at least not to enter the year.

Love routinely has shown his excellent athleticism and ability to throw on the run, such as this fantastic attempt, which came up a few inches shy of a touchdown.

Yet, we also saw Love’s perfect touchdown toss to Doubs up above. He can make the throws, on occasion, but he just needs to build chemistry with his receivers, and really, to see the field. That’s tough to do when you backup a four-time NFL MVP.

But if you’re the Packers, you’re likely at least comfortable with Love as their QB2. It’s a much better situation than many other backup situations around the NFL. Still, they hope Love never has to play a snap during the regular season.

Related: Aaron Rodgers calls out Green Bay Packers young receivers, what it means for the offense

It’s rare for a kicker to draw any attention, especially during the preseason with rosters currently expanded to 85 players per team. But nobody told Wil Lutz that he couldn’t make the highlight reel.

We already knew Lutz had a big leg. He drilled a 58-yarder in 2019, his career long. He cleared that mark on Friday, drilling a 59-yarder at Lambeau Field. Lutz missed the entire 2021 season, but the Saints are happy to have their big leg back in 2022, and he showed he still has it, if not more.

Lutz shared some of the spotlight with Kirk Merritt, an undrafted third-year pro, who had a 59-yard kick return to put the Saints in good field position in the first quarter.

Finally, third-year punter Blake Gillikin blasted an 81-yard punt. I don’t think anyone on the Saints sideline cared that it was a touchback instead of pinning the Pack inside their 20. Any way you slice it, that’s a win. Oh, and he also had a 67-yard punt, so this was no one-hit wonder.