The NFL preseason is ripe terrain for pundits to pontificate on which teams and players are destined for greatness and which are doomed for defeat.

Neither conclusion can be drawn from limited snaps and showcases against backups, but I’m of the belief that there are some things fans can glean from preseason games. For the Miami Dolphins, for example, the return of preseason football means a first look at the team’s new co-offensive coordinators George Godsey and Eric Studesville.

The main attraction, however, was Miami’s second-year quarterback Tua Tagovailoa, who played 60 total snaps during the team’s first two preseason games. That includes playing the entire first half of Miami’s second game against the Atlanta Falcons.

So, in an effort to draw some more useful conclusions from the Dolphins’ preseason, I went back and rewatched every offensive and defensive snap from the first half of each of the team’s first two games, when starters were still involved. For game three, head coach Brian Flores chose to sit virtually every non-rookie expected to play a meaningful amount of snaps during the regular season, so I didn’t include notes from that game in this breakdown.

With that setup, let’s get into it.

I couldn’t help but admire Tagovailoa’s adept pocket movement time and time again while he was on the field.

Last season, the rookie was constantly under pressure, which caused him to move erratically. Far too often, as many young quarterbacks are prone to do under poor offensive line play, he tucked the ball and ran at the first sign of pressure.

During the preseason this year, that wasn’t the case.

Him stepping up in the pocket led to multiple big plays throughout the preseason. In the second offensive possession against the Atlanta Falcons, Tagovailoa stepped up in the pocket as Atlanta brought a five-man blitz and hit his tight end Mike Gesicki on a crossing route over the middle to pick up a first down.

Two plays later, he stepped up again, this time hitting running back Myles Gaskin over the middle for a touchdown. While the Falcons didn’t blitz this time, the left side of the offensive line gave up pressure almost immediately, but Tagovailoa shrugged it off without ever taking his eyes off of his intended target, which was the easiest and correct read on the play.

The very next drive, he hit another two big plays after stepping up.

All-in-all, Tagovailoa only took one sack the entire preseason. And even that sack came after stepping up in the pocket to avoid two rushers, only to be taken down by a third.

Here’s another instance of Tagovailoa climbing the pocket, keeping his eyes downfield instead of being intimidated by the rush, and rifling a completion into a tight window:

He didn’t just step up, too. There were a handful of plays that had Tagovailoa sidestep out of a rush coming up the middle, leading to sidearm dump-off passes to his running backs and positive yardage.

While these weren’t always the flashiest of plays, Tagovailoa’s pocket awareness and movement made him look like a true starting-caliber quarterback drive after drive.

Can Tua Tagovailoa guide the Miami Dolphins to the postseason? Read our NFL playoff predictions now

Some of the NFL’s most prolific offenses over the past three years have also been the ones using pre-snap motion at the highest rates. So, I was on the lookout for how often and in what situations Godsey and Studesville would employ motion.

As it turns out, not so often during the preseason.

There was one important caveat: When rookie wide receiver Jaylen Waddle was on the field, Miami had him motioning in all sorts of ways.

On Waddle’s most electric touch, he came in motion from the slot on the fourth offensive play of the game against Atlanta. Tagovailoa snapped the ball just as Waddle got into the backfield and delivered an easy pop pass, which Waddle broke off for a 10-yard gain after he got to the outside.

It wasn’t anything out-of-this-world creative. But, for Miami’s offensive coordinators to break this out during preseason with their first pick in this year’s draft could be a sign of how they intend to use Waddle in the upcoming season.

Waddle’s motion is also what helped instigate the touchdown pass to Gaskin mentioned before. Inside the 10, Waddle came across the formation and a cornerback shadowed him, indicating man coverage to Tagovailoa. That’s why he knew to step up in the pocket to buy Gaskin just one extra second to break free of the linebacker covering him and walk into the end zone.

On defense, more of the same

If there was one takeaway I had from the Dolphins defensive scheme, it was that coach Flores loves to line up five potential rushers in front of the opposing team’s offensive line.

While I don’t have a concrete count from the broadcast replays, the Dolphins must have shown a five-man front on at least 80% of all their defensive snaps during the first half in each of their first two games. And it continually worked, with gaps rarely opening up in the run game.

It’s my no means a novel concept, but defenses have shied away from lining two linebackers up at the line on the majority of plays in recent years, unless they’re planning some kind of blitz. 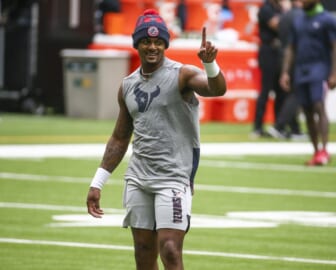 On the back end, the Dolphins did not shy away from playing press-man coverage again and again, as was the case last season.

Much like the loaded fronts, however, it kept working. The team’s cornerbacks stuck to opposing wide receivers more often than not, even when left out on an island when the team decided to bring all five of the potential rushers they had stacked on the line.

On the very first third down the Dolphins faced on defense in the first game, for example, Flores brought a five-man blitz. Nik Needham played the slot receiver perfectly to break up the pass as the slot corner.

I counted two additional times Needham broke up passes in similar blitzing situations. This leads me to believe he’ll likely hold onto his role as the starting slot cornerback over second-year first-round pick Noah Igbinoghene.

In my eyes, there should be no doubt that Gaskin is Miami’s lead back heading into the regular season.

Some looked toward the number of carries free agent addition Malcolm Brown had in the first preseason game as a sign Gaskin’s role may be fading. Brown may have had nine carries to Gaskin’s four, but Brown proved to be far less efficient.

Additionally, most of Brown’s carries came from heavier sets with Tagovailoa under center, which wasn’t the preferred offensive formation. While the Dolphins loved to run two tight end sets throughout the preseason, when Tagovailoa was in shotgun, it was usually Gaskin or Salvon Ahmed next to him thanks to their pass-catching ability.

Still, the Dolphins did trend toward using heavier sets with two tight ends lined up next to offensive lineman – although Gesicki usually was split out wide. That’s not too different from last season, where the team’s offense was lined up with two tight ends and one running back on 28% of offensive plays, according to Sharp Football Stats. That was the seventh-highest rate in the league.

That’s all to say that Brown can still have a role in this offense when the team is fishing for short gains through the run game.

But more often than not, I expect Gaskin to get the majority of overall snaps based on what we saw in preseason. He’s clearly the better option for passing game work and outside zone runs.