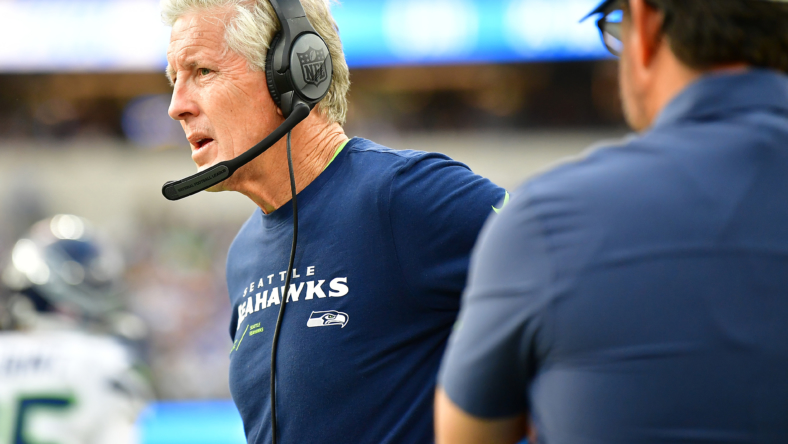 The Seattle Seahawks traded Russell Wilson but are still 6-3, in first place of the NFC West. This is a result no one anticipated before the year kicked off for coach Pete Carroll and Co. In fact, we didn’t even know whether it would be Geno Smith or Drew Lock winning the starting quarterback gig after Wilson’s departure.

Months later, all of this seems very silly after Smith has played his way toward becoming a legitimate MVP candidate. But seeing Seattle go from scoring 23.2 points per game (16th in NFL) to averaging 26.8 PPG (4th) as they made the change from Wilson to Smith from one year to the next has been eye-opening.

Just what is the secret to Seattle’s suddenly smooth and splashy offense? It’s a question coach Carroll was asked after the team’s Week 9 win over Arizona.

“Geno’s going off the wristband, which is a big help. It’s smoothed things out, sped things up, cleaned things up…We never did that before. There was resistance to that, so we didn’t do it before.”

While Carroll is far too professional to deliver a direct hit to his former quarterback for 10 years who also helped win him a Super Bowl, it’s also hard not to understand the not-so-subtle blow he pointed at Wilson. By saying “there was resistance to that”, he’s not talking about Smith. He’s talking about the QB who currently leads the third-lowest scoring offense in the NFL.

From seeing all the maniacal game management decisions coming out of the Nathanial Hackett-led Denver Broncos in Wilson’s first year with the team, with each week that goes by, it’s hard to suggest the Seahawks didn’t pull off one of the greatest heists in NFL trade history.

While Smith currently leads the NFL in completion rate and is leading what appears to be a playoff team, Wilson hasn’t had nearly the same success he enjoyed for many seasons under coach Carroll in Seattle. No matter how respectful one tries to be, it has to feel good for Carroll’s determination to be paying off, and that’s what we heard come through with his latest quote.