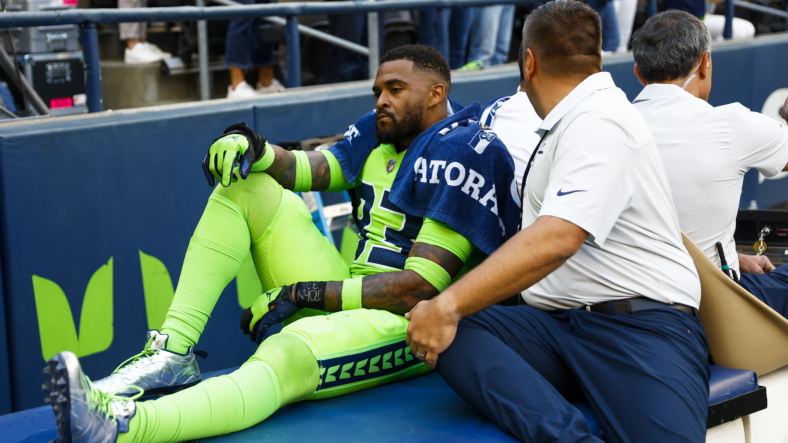 Ever since the trade, both Jamal Adams and the Seattle Seahawks have had a rough time. Now, that experience has gotten a lot worse. Adams reportedly suffered a torn quad tendon in Monday night’s game against the Denver Broncos.

According to NFL Network’s Ian Rapoport, Adams is now being placed on injured reserve and is expected to undergo season-ending surgery. For Adams, it’s the fourth consecutive year he’s battled injuries, although this one is the most serious yet.

Adams should be able to make a full recovery and be back to 100% by the time the 2023 season rolls around, but this is a big blow to a Seattle team still searching for an identity after trading Russell Wilson. Their first week started better than anyone could have ever imagined by beating the Broncos. Though, if they’re to continue that effort, it won’t be with Adams for the rest of this season.

Instead, the Seahawks will likely turn to the next man up on the depth chart, which currently lists veteran safety Josh Jones as the starter opposite Quandre Diggs. Jones has started 26 games over his six-year NFL career. Yet, there’s always the possibility Pete Carroll looks outside the organization to fill the new sudden need in the back of his defense as well.

The Seahawks had a woeful defense and needed a playmaker to help usher in a new era. The Legion of Boom was long gone, and the talent on the depth chart was bleak.

Insert Adams, who general manager John Schneider acquired from the New York Jets back in the 2020 NFL offseason. In doing so, the Seahawks parted with two first-round selections, a third-round pick and Bradley McDougald for Adams and a fourth-round pick.

Those two first-round picks ended up being the 23rd pick in 2021 (later used in a trade up to get Alijah Vera-Tucker) and the 10th pick in the 2022 NFL Draft to select wide receiver Garrett Wilson.

Clearly, the Seahawks didn’t care about any future implications at the time of the trade, they were solely focused on re-building their defense while putting the best roster possible around their face of the franchise, Russell Wilson.

We see now all those efforts were to no avail, as Wilson still requested and received his trade out of town.

In hindsight, could the Seahawks have used those two selections to reinforce their core of talent? You bet they could have. But no one ever knows what the future holds, and no one could have predicted Wilson to miss three games with an injury last season. Just like we couldn’t predict Adams would later tear his quad three years later.

Now, a season after Adams received a four-year $70 million extension, he’s set to miss at least 21 games of that contract, counting the five he missed in 2021.

As far as evaluating his future with the team? He’s stuck in Seattle on a team mired in a full rebuild. The Seahawks can’t move off his contract in 2023 without suffering a $21 million cap hit in dead salary.

Either way, we all hope Adams can return to health as soon as possible, as the league is at its best when its stars are on the field instead of on the sidelines.