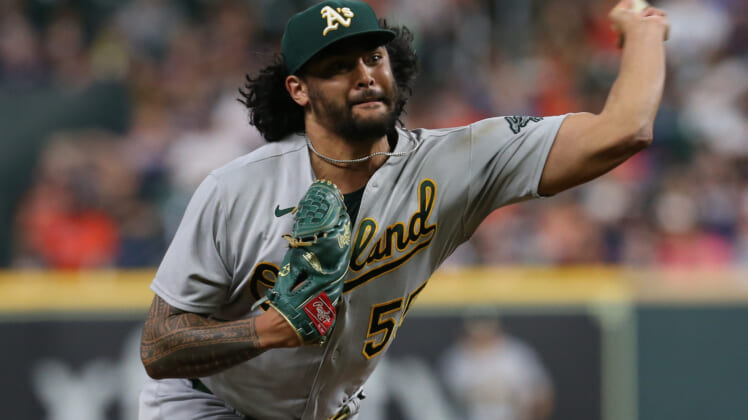 Sean Manaea could be putting on a new hat soon. Why? The Oakland Athletics appear to be in the midst of a fire sale, as they’ve traded right-hander Chris Bassitt to the New York Mets and first baseman Matt Olson to the Atlanta Braves.

The 30-year-old Manaea is a smooth starting pitcher. The left-hander logs strikeouts at a high rate, is efficient and finds success primarily relying on his sinker. He’s a capable top-of-the-rotation starter who enhances any MLB starting rotation.

The Royals have a deeply entrenched rebuild that’s going nowhere. They’ve been rotting at the bottom of the American League Central for the better part of the last five years and project to remain in the cellar next season. Kansas City needs some life. Acquiring Manaea stirs some sauce.

The Royals have a young pitching staff that has left much to be desired. Brad Keller, Brady Singer, Kris Bubic and Jakob Junis (before his departure to the San Francisco Giants) have had their moments but been unable to sustain success. Manager Mike Matheny needs an ace, and Manaea becomes his opening day starter.

Manaea provides some length, has postseason experience and provides a much-needed proven starter to the mix. He’d be a step in the right direction for this unit. Plus, it’s fair to expect one of Keller, Singer and Bubic to have a plausible 2022 campaign. Maybe top pitching prospect Asa Lacy reaches the big leagues and finds success?

While the Royals’ offense has been up and down, they do have some pieces to be enthused by including Whit Merrifield, Nicky Lopez and Andrew Benintendi. Meanwhile, veterans like Salvador Perez and Michael A. Taylor are stabilizing forces. One way or another, though, help is needed on the pitching front if the Royals are going to make headway in the AL Central.

All that said, the Royals may refrain from trading a highly touted prospect or two for Manaea, as he’s on an expiring contract.

2) Seattle Mariners go for it with a Sean Manaea trade

The Mariners mean business. Coming off a 90-win season, president Jerry Dipoto has acquired Adam Frazier, Jesse Winker and Eugenio Suarez while signing 2021 AL Cy Young Award winner Robbie Ray. Acquiring Manaea would be an emphatic way for the Mariners to cap off a tremendous offseason.

Ray is presumably manager Scott Servais’ ace while Marco Gonzales, Chris Flexen and Logan Gilbert follow the southpaw in the rotation. While that rotation is respectable, it’s not flawless. Ray has been held back by injuries at varying points of his MLB career. Flexen has one standout season as a starter. Gilbert has just one big-league season as a starter under his belt.

Manaea has his own baggage, as he has suffered a couple of significant injuries himself. That said, the more depth the Mariners have, the more likely they are to hit it big. Manaea provides a proven starter who’s accustomed to AL West competition (he has competed against the Mariners and the AL West as a whole his entire career).

Seattle’s goal is to make the playoffs next season. They’re vastly improved across the board. Manaea could be the piece that pushes them over the edge — in a good way.

The factor that could stop the Mariners from trading for Manaea, though, is them calling it quits with trading from their prospect capital until at least the MLB trade deadline.

The White Sox have made a handful of savvy signings this offseason including Leury Garcia, Josh Harrison and Joe Kelly. Chicago recently lost Carlos Rodon, who was their best starting pitcher when healthy last season, to the San Francisco Giants. Manaea fills a void in the back half of manager Tony La Russa’s rotation.

Lucas Giolito is an ace. Lance Lynn is a sturdy force. Dylan Cease has made strides. Dallas Keuchel probably doesn’t post a 5.28 ERA again next season. Throw Manaea in the mix and the White Sox have a top-tier pitching staff. 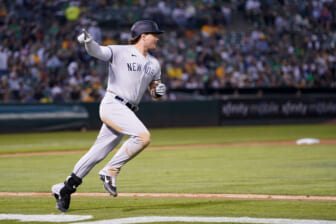 As previously alluded to, Manaea is accustomed to postseason pitching, which comes in handy for a team that hasn’t collectively won a playoff series. Manaea’s presence also balances out Chicago’s rotation in having a fairly balanced combination of left and right-handed pitchers.

In thought, the White Sox can fill the fifth starting position with Reynaldo Lopez or Michael Kopech. On the other hand, Lopez has been inconsistent and has experience coming out of the bullpen. Kopech has struggled as a starter and become an electric force out of the bullpen. Why mess with it? Plus, Manaea is more of a sure thing than the two young arms.

The White Sox have World Series aspirations. They can afford to surrender a blue-chip prospect and take a chance on Manaea.