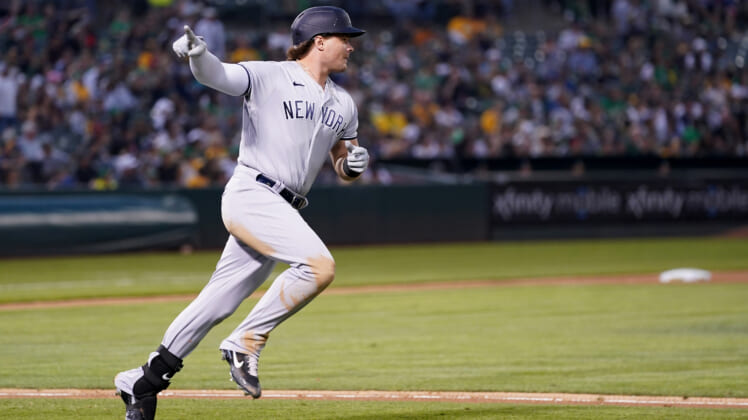 The New York Yankees have an infield logjam, and Luke Voit is poised to get the boot. This comes with the team’s recent trade for infielders Josh Donaldson and Isiah Kiner-Falefa and the possibility of them re-signing first baseman Anthony Rizzo.

While Voit has been inconsistent in his time with New York and a shaky fielder, he’s capable of being a legitimate power threat from the right side. He demolishes pitches to all fields and draws a considerable amount of walks. Realistically, the Yankees will get a mid-level and lower-level prospect for Voit, as they don’t have leverage in trade talks given their infield glut. That makes Voit a compelling trade option for any team that needs a first baseman.

Cleveland isn’t good enough to be an American League contender, yet they’re not bad enough to be sellers. That means there’s only one path forward: finding a way to compete. Acquiring Voit helps them in that quest.

Voit can flat-out rake, which comes in handy for a Cleveland offense that has been one of the worst units in the sport over the last two seasons. At the moment, Bobby Bradley, who showcased a power bat last season, is likely the Guardians’ first baseman. That said, he struck out at an alarming rate last season and is still raw. Maybe Bradley isn’t a lock to start at the corner infield position?

Voit can hold down a multipurpose role in manager Terry Francona’s depth chart. On one hand, he can be their primary first baseman. Another option is Voit platooning with Bradley, a left-handed hitter, at first. Voit can also be the team’s designated hitter when Franmil Reyes occasionally plays the field or gets a day off altogether.

Voit would be a veteran complement for a generally young offense outside of Jose Ramirez and Reyes. A new team could bring out a more consistent version of Voit.

All that being said, the Guardians may refrain from acquiring Voit, as they could want Bradley in the lineup every day.

Yes, the Dodgers still have the depth to sport one of the best offenses and teams in baseball in the wake of Max Scherzer and Corey Seager’s departures. At the same time, there’s plenty of reason for them to add another proven hitter, especially for their infield rotation. Voit fits the bill.

Max Muncy may very well be manager Dave Roberts’ opening day first baseman, but the former is also adept at playing second base. In other words, Voit plays first and Muncy sets up a tent at second. Another option is Voit serving as the Dodgers’ primary DH and backup first baseman.

Voit’s presence gives the Dodgers proven depth in the scenario that injuries pile up like they did last season. Mookie Betts, Cody Bellinger, A.J. Pollock and Justin Turner have all dealt with injuries that have kept them off the field for extensive time in recent memory.

The Dodgers are built to win the World Series. While they could fill out their depth chart with players like Edwin Rios and Matt Beaty, the Dodgers are better off relying on proven commodities like Voit. He gives them another plausible hitter who helps get runners across the basepaths. Voit is just a year removed from blasting an MLB-best 22 home runs in the sport’s 60-game regular season.

As previously alluded to, though, the Dodgers could find their solutions in the building and opt against trading a prospect for Voit.

1) Luke Voit to the Oakland Athletics

The A’s are officially selling. They’ve traded Chris Bassitt and Matt Olson with Matt Chapman, Sean Manaea and Frankie Montas potentially next. Despite all those moving pieces, though, the A’s will surely look to at least be competitive moving forward; they’re a low-payroll, number-crunching organization. Voit would be a savvy investment for the A’s.

With Olson gone, manager Mark Kotsay needs a new first baseman. Furthermore, it’s tough to find an immediate answer for Oakland in their own building, which opens the door for a Voit trade. 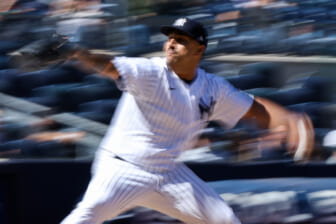 Voit provides a veteran first baseman for a presumably young starting infield. Uncertainty has surrounded Voit’s standing with the Yankees since Rizzo’s arrival last season. Again: there’s no one in his way for the starting first base job moving forward with the A’s.

He can get his career back on track with a team that finds a way to generate slug and grind out runs. If and when the A’s get growth from their new youngsters, Voit serves as a complement to their foundation and a proven power hitter for the middle of the order.

Voit is under contract through 2024. If he rakes, the A’s have a first baseman in his prime for three years. Maybe they’re a playoff team within the next two years? Voit is a low-risk, high-reward option.