Prior to their landmark decision to move up in the 2021 NFL Draft to select Trey Lance, the San Francisco 49ers were rumored to be in on the Matthew Stafford trade market, only to see him dealt to the NFC West rival Los Angeles Rams.

Niners head coach Kyle Shanahan confirmed in a podcast interview with The Ringer‘s Peter Schrager and Rams counterpart Sean McVay that San Francisco was indeed circling Stafford, but the LA beat its divisional nemesis to the punch, per NFL.com’s Kevin Patra:

“Stafford’s the man. […] He’s actually underrated to me. I know how good of a guy you got. I know how good he is at play-action. I know how smart he is. Not only does he just have a big arm, but he’s got touch, he knows where to go with the ball. So I was trying to get involved in it.

“… I remember Saturday I was so stressed out and finally we talked to someone, it was seven at night, and they’re like, ‘No, nothing’s happening (with a trade) at the earliest until tomorrow, so you can finish your night.’ So I’m like, alright, I’m done. […] Half an hour later, my buddy calls me and is like, ‘I’m just telling ya, if you want Stafford, you need to get a hold of him right now.’ I’m like, ‘What do you mean? We just talked to people. I can sleep on this. We’ll talk to them tomorrow.’ ‘I’m just telling you, you need to talk to him right now.’ And then it was all over.

Once again, it’s clear that San Francisco was eager to move off Jimmy Garoppolo, and probably would’ve included him in a trade to the Detroit Lions if that’s what it took to get Stafford. Alas, a deal didn’t come to pass.

So, what does this have to do with Lance? Well, the 49ers traded two future first-round picks to move up for him, which was the same cost Los Angeles essentially paid to get a proven, high-level QB in Stafford.

Expectations are inevitably going to be high when a prospect is drafted third overall, which Lance was. However, the circumstances leading up to his arrival, and this confirmed revelation that Stafford was under heavy consideration, only ratchets up the pressure.

Because the 49ers could’ve had Stafford for the same price they paid for an FCS quarterback from North Dakota State who attempted only 318 passes in college, there won’t be any excuses for Lance as he makes the leap to the pros.

Garoppolo is a fine signal-caller, but his inability to stay healthy is a big reason why San Francisco was so proactive on the QB market this offseason. You won’t find a much more durable, reliable field general than Stafford, who didn’t miss a single start in nine of the past 10 seasons.

What makes Lance exciting is the fact that he’s barely begun to realize his potential. His ceiling is extremely high, he has plenty of arm strength, hails from a pro-style offense, and he is absolutely lethal as a ball-carrier.

But there’s so much unknown about Lance. The 49ers made a huge risk trading up for a QB who, yes, went No. 3 overall, but was also the third player at his position to come off the board, behind Trevor Lawrence and Zach Wilson.

The widely-held belief and the 49ers’ plan is to start Garoppolo until Lance is ready, or is thrust into action should Jimmy G get hurt again. All the while, San Francisco could’ve immediately put Stafford into the lineup, moved off Garoppolo, and probably gotten elite play at the most important position. 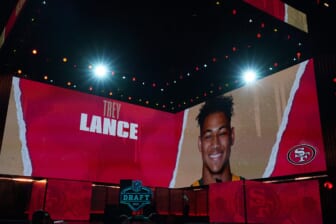 Shanahan’s schematic brilliance will put any solid QB in position to thrive. Stafford’s arm talent is off the charts, and getting put into a much better situation with the Rams is garnering him deserved MVP hype for 2021. The combination of Stafford and McVay, at least on paper, sounds like bad news for the rest of the NFL.

Meanwhile, even the healthiest version of Garoppolo isn’t as good as Stafford, and again, the Niners sacrificed a lot just to acquire Lance. He’ll need to play at an incredibly high level to justify that cost — and to vindicate San Francisco’s decision to ultimately pass on Stafford in favor of him.

Lance will go head-to-head with Stafford twice a year, someday supplant Garoppolo — who was one slight misfire from winning Super Bowl MVP — and be charged with living up to the iconic precedent set in the 49ers organization at his position with Joe Montana and Steve Young.

Nothing about the job Lance is taking on is easy. San Francisco’s publicly confirmed interest in Stafford just made the tall task ahead of the 21-year-old even more intense.

Imagine if Stafford is hoisting the Lombardi Trophy in LA while Lance sits on the sidelines for a season, even two? You can bet Shanahan and 49ers GM John Lynch will be on the hot seat then.