If Carson Wentz falls to 1-4, Sam Howell needs to be the Washington Commanders starting QB 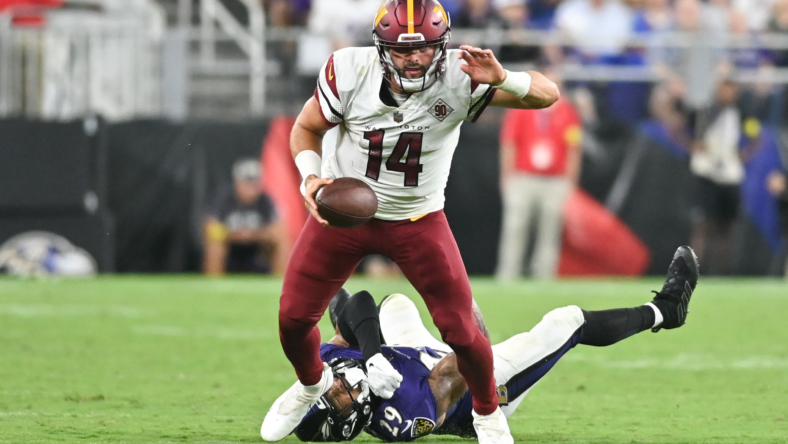 This past offseason, it was clear the Washington Commanders needed to add to their quarterback room after another disappointing season, partially due to Ryan Fitzpatrick’s unfortunate injury in Week 1. Backup Taylor Heinicke may have managed to lead a 7-10 season, but expecting him to grow into a starter capable of leading a high-powered offense into the playoffs wasn’t going to happen. They settled on trading for Carson Wentz and later added Sam Howell in the fifth round of the 2022 NFL Draft.

After swapping second-round selections in addition to sending their 2022 and 2023 third-round picks to the Indianapolis Colts for a chance to take on a reclamation project in Wentz, of course their new acquisition entered the season as the unquestioned starter. Yet, after a 1-3 start, staring down the barrel at a possible 1-4 record, maybe it’s time to reconsider the depth chart in Washington. In particular, despite being the 144th pick, let’s give the rookie out of North Carolina, Howell, a shot.

Even when the Commanders added Wentz via trade, it was always seen as a gamble. Sure, the QB had displayed stretches of elite play, but to be fair, those glimpses have gone into full hibernation mode the past couple of seasons. Still, front offices can’t help but continue taking chances on the second overall pick from the 2016 NFL Draft. Now on his third team in as many seasons, Wentz had to already understand this could be his final opportunity to enter the season as a starter the moment he arrived in Ashburn, Virginia.

Unfortunately, just four weeks in, Wentz’s play is already providing cause for concern, with coach Ron Rivera having to answer questions of whether there’s been any thought to benching his starting QB just yet, insisting ‘there’s no sense of panic‘ just yet. While it’s easy to point to the team’s 1-3 record and say their effort hasn’t been good enough, the stat sheet backs up the eye test as well.

The positive outlook for Washington involves being able to walk away from Wentz and the $53 million remaining on his contract. Once the 2022 league year ends, the Commanders can either cut or trade Wentz without incurring any dead salary penalties to their future cap sheet. It’s one of the biggest reasons why some players become untradeable, but Wentz won’t have any such anchors impacting his trade value once the season wraps up. Otherwise, if the Commanders stand pat, Wentz is under contract for two more seasons through 2024.

Sam Howell’s development could be key for Washington Commanders

Simply put, if the Commanders move to 1-4 after this Sunday’s battle with the 2-2 Tennessee Titans, coach Rivera won’t have a choice but to reevaluate his starting QB for Week 6. Unfortunately, it comes at nearly the worst time possible, as the Commanders then have a short week, heading to Soldier Field for a Thursday Night Football showdown with the Chicago Bears, who might be one of the worst teams in football (ignore their fake 2-2 record). Wentz may give Washington their best chance to win, but turning around a 1-4 season into a playoff run is incredibly unlikely.

Getting first-year QB Sam Howell a few more reps, on the other hand, could be far more valuable in the long run. Albeit in preseason play, Howell held his own playing with backups and, of course, against other backups. Yet, he can’t control that. It’s either sink or swim, and the rookie looked ready to make a splash.

Unlike Wentz, Howell showed a better ability to flee the pocket when the Commanders’ protection scheme breaks down, where he was able to chip in 94 rushing yards and two scores in three exhibition games. Obviously, Howell still has a lot to work on, as he’s just 22 years old, but he’s not going to improve drastically from the bench. Getting him into the action early gives Howell a chance to get back in the lab, knowing specifically what he needs to work on heading into the 2023 offseason.

Although it may have seemed like a long shot four weeks ago, we may not be far from witnessing Howell make his official NFL debut. The point is, if Wentz isn’t the solution, it’s time to start getting answers about the other QBs on the roster. Maybe coach Rivera turns to Heinicke first since he has more experience in the system, but that would only be hurting the team in the long term. They need to know what Howell offers before the year wraps up, and there’s no better time to do so following a loss.

If Washington finds itself in an early deficit, we might even see an in-game change this Sunday. Yet, they’d be much better off putting Howell in instead of the known commodity in Heinicke. We’ll see what happens once the game kicks off.

Related: 3 reasons the Carson Wentz trade is already a failure for the Washington Commanders