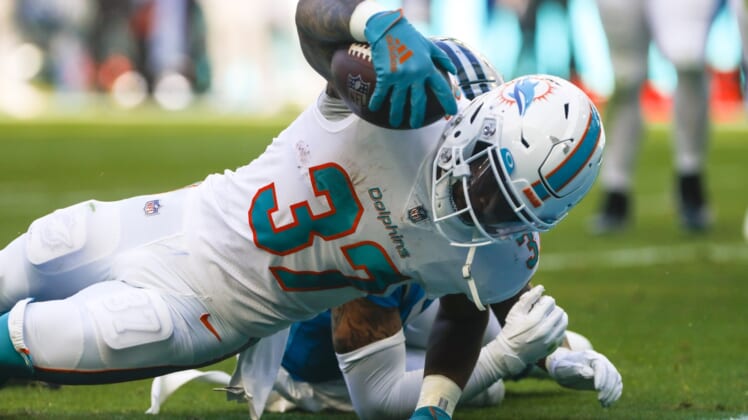 Tua Tagovailoa completed 27 of 31 passes for 230 yards and one touchdown, leading the host Miami Dolphins to their fourth straight win, beating the Carolina Panthers 33-10 on Sunday afternoon.

It was Miami’s highest-scoring game of the season.

Carolina (5-7) benched starting quarterback Cam Newton early in the fourth quarter. Newton completed just 5 of 21 passes for 92 yards and no touchdowns. He was intercepted twice and sacked once.

Miami (5-7) got a great performance from rookie wide receiver Jaylen Waddle, who caught nine passes for 137 yards and one touchdown. It was his first career 100-yard game.

The Dolphins also benefitted from a punt block recovered in the end zone, and Myles Gaskin had two rushing touchdowns, both of them 3-yarders on direct snaps.

Miami’s defense picked off three passes, by Xavien Howard, Jevon Holland and Nik Needham. Howard, who has twice led the league in interceptions, has 25 career picks.

Special teams put the Dolphins on the board first as Justin Coleman, who was covering the gunner, blitzed. He was blocked, but that freed Duke Riley for an untouched path to the punter. Coleman recovered the blocked punt and traveled 2 yards for a 7-0 lead.

Despite getting a punt blocked for the first time since 2014, Carolina had an early answer as Newton beat a seven-man blitz with a 64-yard pass to DJ Moore. Newton capped that drive with a one-yard TD run.

In the second quarter, Howard ran his interception back to the Carolina 9-yard line. On third and goal from the 9, Tagovailoa hit Waddle with a TD pass, giving Miami a 14-7 lead.

Gaskin’s 3-yard TD run and a 41-yard field goal from Carolina’s Zane Gonzalez left the Dolphins with a 21-10 halftime lead.

Miami put the game away with its first possession of the second half, a 13-play, 80-yard march that ended in another Gaskin score. That drive ate up 7:24 on the clock.