Chris Jones recorded 3.5 sacks and forced a fumble Sunday as the Kansas City Chiefs limited the NFL’s top-rated offense to 276 yards and no touchdowns, smothering the Dallas Cowboys 19-9 at Kansas City, Mo.

The Chiefs (7-4) continued a defensive resurgence, winning their fourth straight by pressuring Dak Prescott and allowing him to gain just 216 yards on 28-of-43 passing with two interceptions. Prescott’s last attempt was picked by L’Jarius Sneed off a deflection by Jones with 1:00 left.

While the game was billed as a clash between two of the NFL’s best quarterbacks, Patrick Mahomes also did not throw for a TD. But the Chiefs rolled to a 13-point lead early in the second quarter before relying on their defense.

Mahomes passed for 260 yards, completing 23 of 37 with one interception. Clyde Edwards-Helaire, returning from a knee injury that sidelined him for five games, rushed for 63 yards and a touchdown. Tyreek Hill posted a game-high nine receptions for 77 yards. 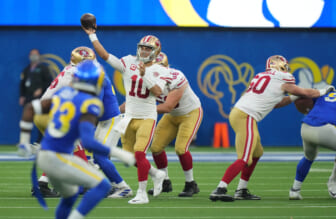 The Chiefs’ only second-half score came with 2:36 left in the third quarter on a 53-yard field goal by Harrison Butker.

The Cowboys (7-3) played without Amari Cooper, who was placed on the COVID-19 list after preparations for the Chiefs began. They also lost CeeDee Lamb late in the first half with a head injury. Dallas had four drops, while tight end Dalton Schultz led in receiving with six catches for 53 yards.

The Cowboys settled for three field goals from Greg Zuerlein. 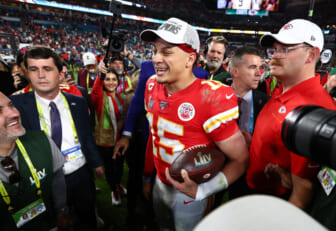 Kansas City scored on each of its first three possessions, including touchdown runs by Travis Kelce off a direct snap and another by Edwards-Helaire.

The Cowboys managed just a 33-yard field goal by Zuerlein as Dak Prescott lost a fumble and threw an interception while passing for just 68 first-half yards. Dallas also went three-and-out three times in the half.

An opportunity for Dallas came late in the half after a strip-sack by Micah Parsons at the Kansas City 42. However, the Chiefs’ Charvarius Ward snagged a pick in the end zone with 15 seconds left.