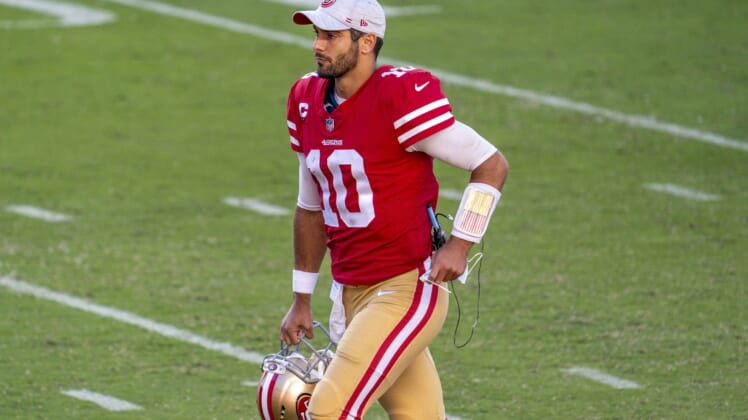 New England Patriots rumors this offseason will primarily focus on who is going to replace Cam Newton at quarterback. It has been noted multiple times that Newton would be one-and-done in New England following a disastrous 2020 campaign for the former NFL MVP.

At this point, we have absolutely no idea who is going to replace Newton under center. What we do know is that head coach Bill Belichick is going to turn over every stone to find a long-term replacement for Tom Brady. That could very well come in the form of a certain former Patriots backup quarterback.

Is Jimmy Garoppolo a realistic option for the Patriots?

Suggestions out of Northern California are that the San Francisco 49ers will do everything possible to upgrade from Garoppolo after an injury-plagued 2020 season that saw him miss all but six games due to multiple high-ankle sprains. Whether it’s via a trade or release, there’s a decent chance Garoppolo is done in San Francisco. If so, Patriots great Tedy Bruschi believes he’s their best option.

“The best candidate for the Patriots’ starting quarterback role might be Jimmy Garropolo,” Bruschi said on WEEI recently. “Any other quarterback, why do you want to follow Tom Brady? You’re always going to be compared to the successes and the past, and that is going to make it a tough job.”

Garoppolo, 29, served as Brady’s primary backup from 2014 to midway through the 2017 season when he was ultimately traded to the 49ers. Patriots rumors at that point suggested that there was a rift between Belichick and owner Robert Kraft regarding Garoppolo. Belichick saw the writing on the wall as it related to Brady, and viewed Garoppolo as the long-term option.

Years later, and there’s talk that Garoppolo could return to his roots.

“You better have some guts to come in here,” added Bruschi. “I’ll tell you that right now because from Day 1 it is going to be like, ‘OK, we’re ready for a Super Bowl championship.’ And will have to deliver because that’s what (fans) are used to here. I think Garoppolo knows that.”

During his tenure with the Patriots, Garoppolo started just two games. That came when Brady was suspended over the entire Deflategate scandal that plagued the organization back in 2016. He might know all about the culture in New England. However, replacing the all-time great six-time Super Bowl champion on a full-time basis is a completely different monster.

Patriots rumors will not stop with Jimmy Garoppolo

There’s clearly some issues as it relates to Garoppolo. Otherwise, the 49ers would not be looking to move off him less than a calendar year after he led the team to a shocking Super Bowl appearance. Belichick and Co. must understand that.

Garoppolo missed 10 games to injury this past season. He also sat out all but three games back in 2018 due to a torn ACL. When on the field this past season, the former second-round pick was mediocre, at best.

Related: NFL quarterbacks who could be on the move

He threw just seven touchdowns in six starts while throwing five interceptions in the process. That came on the heels of a 2019 campaign in which Garoppolo put up on of the best statistical seasons for a quarterback in 49ers history. The Pats will have to ask themselves what type of player are the getting if they were to swing a deal for the veteran signal caller.

As the 2020 season draws to a conclusion, there’s been a ton of talk about the quarterback market once the offseason gets going. The likes of Carson Wentz, Matthew Stafford, Matt Ryan and Deshaun Watson have been bandied about in trade talks.

This is a clear indication that the Pats won’t settle on Garoppolo simply because they have a built-in relationship with the quarterback. That would be foolish.