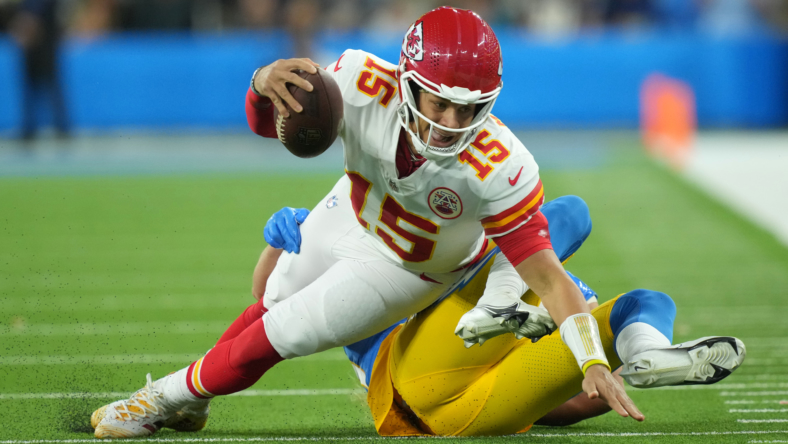 We have to provide somewhat of a backdrop to what went down at SoFi Stadium Sunday night. Kansas City entered the rivalry matchup two games ahead of Los Angeles in the AFC West. A win would complete a season sweep of the Chargers and a three-game lead. A loss would’ve pulled Los Angeles to within one game.

Justin Herbert led the Chargers down the field on a 64-yard drive, culminating in a six-yard touchdown pass to Josh Palmer with less than two minutes remaining to give his team a 27-23 lead.

Anyone who was watching the game, either from SoFi Stadium or at home, knew that the Chargers had given Mahomes too much time.

Like clockwork, it took six plays for the former NFL MVP to lead his team down the field on a 75-yard drive which resulted in a 17-yard touchdown pass to star tight end Travis Kelce for the win with 31 seconds remaining.

This wasn’t anywhere near a surprise. Mahomes has that clutch gene. Kelce has proven to have it, too. We’ve seen it in the playoffs. We’ve witnessed this greatness in the Super Bowl. Chargers fans (those who actually attended the game) were left crying into their chai tea’s as Mahomes did it again.

By virtue of this victory, Kansas City has now won 25 consecutive games in November and December. As random as it may seem, this is an NFL record.

At 8-2, the Chiefs are now three games ahead of Los Angeles in the AFC West with seven games remaining. They have also swept the Chargers, pretty much making this a four-game lead. Meanwhile, the Denver Broncos (3-7) and Las Vegas Raiders (3-7) are about as relevant in the AFC West race as anyone reading this article.

Working with a rookie running back in Isiah Pacheco and without two of his top receivers, Mahomes was able to lead an imperfect Chiefs team to a win Sunday night. It’s safe to say that the legend of Mr. Mahomes has now grown even more, and it will have his Chiefs playing meaningful January football once again.

As for the rest of the AFC West, it’s back to the drawing board.