Odell Beckham, Jr. is open to the idea of a New York Giants return

While it is highly unlikely, Odell Beckham, Jr. is surprisingly not against the idea of returning to the New York Giants in 2022. The same franchise where he earned all three of his Pro Bowl honors.

Beckham, Jr.’s first three seasons in the league as a member of the Giants were at times magical and historic. While the Giants had losing seasons in two of those three years, he took the NFL by storm as he put up the type of numbers that are unheard of for a young wide receiver in the NFL. There were few things he couldn’t do on the field as he racked up 1,300 yards or more through the air and double-digit touchdowns each season. However, things weren’t always perfect for him in New York.

Beckham, Jr.’s unbridled passion on the field often continued on the sidelines and it lead to many uncomfortable displays of his immaturity at the time. And being on a New York franchise only heightened the spotlight on his less flattering moments. Despite bouncing back from a torn ACL in 2017 to score another 1,000 receiving yard season in 2018, the organization had enough of the mercurial star and traded him to the Cleveland Browns in March of 2019.

Related: New York Giants schedule: Getting it right against the Jets

The relationship between the star and the team — as well as the city — had soured to the point where the idea of a reunion seemed absolutely absurd.

Yet there may be a glimmer of hope for Giants fans that long for OBJ to return to New York. After tearing his ACL at the midway point of the Super Bowl, the 29-year-old remains a free agent since he probably won’t return to the field until well after the midway point. While his most recent team, the Los Angeles Rams, and even the Buffalo Bills have been linked to signing him, there has still been no hard evidence pointing to the most likely landing spot for the eight-year veteran. That is why anything is possible at this point. Even a return to the Giants.

In a recent post on his Instagram account (that was spotted by NJ.com), a fan implored the free agent to “Come back to New York, we need you ASAP no rocky.” However, instead of blowing off the comment or giving it a simple like, Beckham, Jr. actually responded and left the door wide open to a New York return. 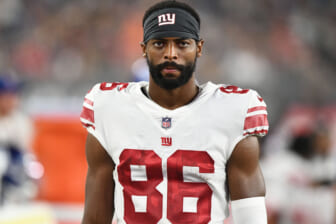 As of now, the Giants don’t have anywhere near the money that Beckham, Jr. would want once he signs a deal, and barring a shocking turnaround, quarterback Daniel Jones is not a major step down from the likes of Matthew Stafford. Nevertheless, he didn’t rule the idea out in what would be one of the more stunning former team returns in sports.