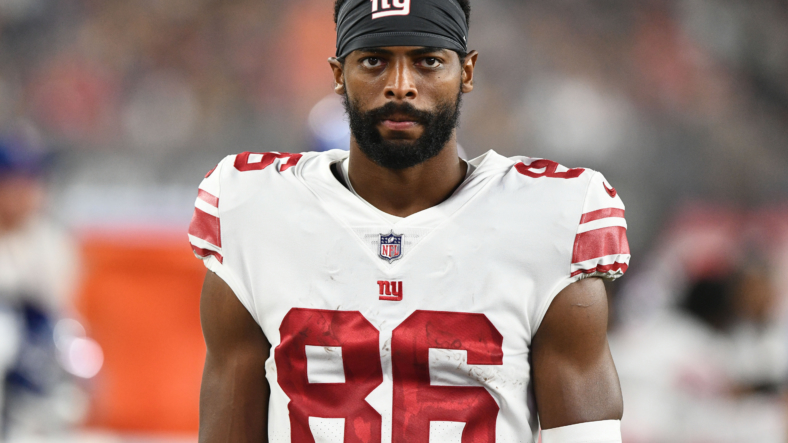 The New York Giants‘ wide receiver room experienced the highest of the highs and the lowest of the lows on Wednesday, which could have a direct impact on Darius Slayton’s future with the team.

The high was Sterling Shepard practicing for the first time since tearing his Achilles on December 19th against the Dallas Cowboys. But in a cruel twist of fate, New York then lost a receiver to a torn Achilles in Collin Johnson. Johnson had been taking reps with the first-team offense during training camp and seemed to be on his way toward making the roster.

In light of what happened on Wednesday, this could play a significant role in what New York decides to do with fourth-year wide receiver Darius Slayton.

Slayton is in the final year of his contract and is scheduled to make $2.54 million this season. After having a shaky showing at OTAs, the 25-year-old receiver was viewed by some as a player on the bubble to make the roster heading into training camp.

After being plagued by drops in the first week of training camp, Slayton bounced back and caught some nice deep passes from Daniel Jones.

However, he is still not on firm grounding to make the roster. With Shepard’s return, Slayton is behind Shepard, Kenny Golladay, Kadarius Toney, and rookie Wan’Dale Robinson on the depth chart.

With Slayton not expected to contribute as a special teams returner, other receivers such as Alex Bachman, C.J. Board, and Richie James could be viewed as more viable options to make the roster since they return kicks.

As of right now, nobody is certain if New York will keep Slayton, try to trade him, or cut him. We’ll take a quick look at each scenario and why they make sense.

Why it makes sense to keep Darius Slayton

Following his rookie season in 2019 when he caught 48 passes for 740 yards and eight touchdowns, some thought Slayton had the potential to be a number one receiver or a high-end number two receiver.

But after the two subpar seasons that followed where he caught 76 passes for 1,090 yards and five touchdowns, his value has gone down. There have been times where Slayton has been productive, and given the injury history of other receivers on the roster, it might be ideal to keep someone who has been productive in this league.

Although the coaching staff and general manager have changed, ownership may not want to part ways with a player they were very high on a few years ago.

Why it makes sense to trade him

As we mentioned earlier, Slayton is in the final year of his contract, and there are other receivers that Big Blue has plans for beyond 2022. So it may behoove New York to try and trade Slayton and get something in return instead of letting him walk via free agency after the season.

Slayton is talented, and there are teams out there that believe he would be a good fit.

One team that comes to mind is the Baltimore Ravens. They could use another receiver to help complement second-year wide wideout Rashod Bateman and might be willing to part ways with a late-round pick to do so.

Related: 5 New York Giants that have stood out the most in the preseason

Why it makes sense to cut him

Aside from winning games, the objective this year for New York is to develop players and a culture for years to come. So New York may decide to cut their losses with Slayton to allow other receivers outside of the top four on the depth chart an opportunity to play to see what they can do.

In addition, the front office is always looking to create cap space and based on the way Slayton has played recently, his salary is not justified. The Giants can save $2.5 million by releasing Slayton right now. For a player who’s no higher than fourth or fifth on the depth chart, his writing may be on the wall.

NFL teams have to cut their roster down to 53 by Tuesday, August 30th at 4 PM ET, and at this point, it’s anybody’s guess what Slayton’s fate will be.