Former Cleveland Browns wide receiver Odell Beckham Jr. has finally cleared waivers and is free to sign with any team. Recently, we reported OBJ had the Green Bay Packers atop his list of suitors.

On Wednesday, Dianna Russini of ESPN revealed Beckham is now narrowing down his ideal landing spots to the Packers, Kansas City Chiefs, and New Orleans Saints.

The New England Patriots also reached out to the star receiver’s camp, but they don’t appear to be on OBJ’s list of finalists. At 5-4, just a half-game behind the Buffalo Bills for the AFC East division lead, the Pats would fit Beckham’s criteria of desiring to sign with a playoff contender, but there are many games left to play.

The Saints make a lot of sense, since Beckham was born and raised in Louisiana and attended college at LSU. At 5-3, despite losing Jameis Winston for the season due to his ACL tear, the Saints also appear to be in a strong position to contend for the postseason. However, Trevor Siemian and Taysom Hill aren’t on nearly the same level as a someone such as Aaron Rodgers or Patrick Mahomes, when it comes to quarterbacking skills. 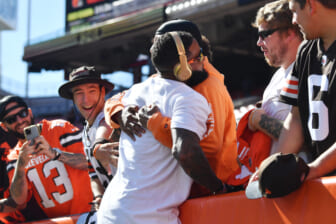 Russini also speculates that Odell could make up his mind by the end of the day Wednesday. We’ll see how quickly he signs with his new team, but we don’t imagine it will be long. If Beckham wants to get back on the field as soon as possible, he’ll have an agreement in the next day or two.

Playing on Sunday would be a long-shot at this point wherever he signs. But I think everyone at this point likely just wants a resolution, including Odell. Hopefully he can get back on his feet soon enough, doing what he does best, making plays on Sundays