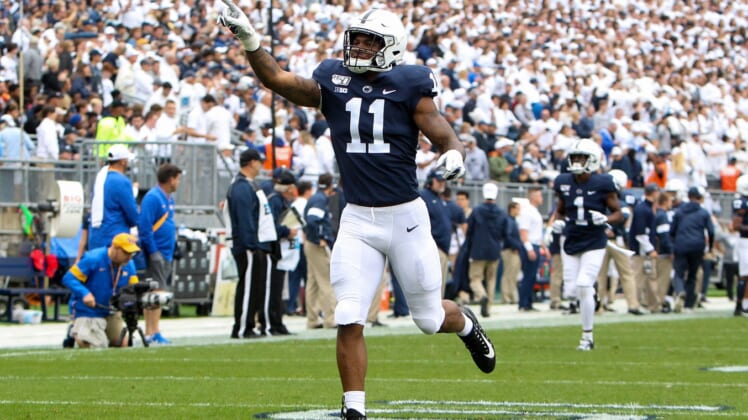 The 2021 NFL Draft will be defined by quarterbacks. Heck, it’s pretty much all about the offensive side of the ball early on. With that said, there’s a number of potentially elite-level defenders who could make major impacts on that side.

Penn State linebacker Micah Parsons is considered the best defensive player in the class. We’re also highly intrigued to see where former Alabama shutdown cornerback Patrick Surtain II lands and who might be the first edge rusher off the board later in April.

Below, we look at the top-five defensive players in the 2021 NFL Draft and their ideal landing spots.

Our most-recent mock had Parsons falling all the way to these Raiders with the 17th pick. Given that the first nine players off the board were offensive players, that’s a real possibility. Even then, I feel like Jon Gruden and Co. might have to trade up in order to land the former Penn State All-American.

Having struggled in the draft over the past three years, these Raiders need to hit big time in Round 1. That’s especially true on defense after this unit gave up nearly 30 points per game in 2020. Sure edge pass rush might be a bigger need, but Parsons makes sense under new defensive coordinator Gus Bradley. He has all the tools to play a similar role as what we saw with Bobby Wagner when the All-Pro was a rookie under Bradley with the Seattle Seahawks back in 2012.

Josh Norman was among the veteran cornerbacks who showed interest in signing with Dallas during free agency. Unfortunately, owner Jerry Jones are capped out. They just don’t have the cash capital to land anyone of substance at this position. It’s a less-than-ideal scenario for a Cowboys defense that gave up 34 touchdowns passes against 10 interceptions a season ago.

Enter into the equation the consensus top defensive back in the entire 2021 NFL Draft. Surtain II dominated elite-level SEC competition this past season. He allowed a total of three touchdowns in 1,000 coverage snaps during his career at Bama. The physical corner also lined up in press coverage at a higher rate than any top-end prospect at this position. That fits new defensive coordinator Dan Quinn’s system to a T. He could become the Cowboys’ version of Richard Sherman, who starred under Quinn in Seattle.

A fast-riser up the draft board, we have this 6-foot-2, 249-pound pass rusher mocked to New York at 11. It would be one of the biggest surprises of the 2021 NFL Draft, but it makes sense for numerous reasons. While Leonard Williams has proven himself to be among the best interior pass rushers in the NFL, the Giants are missing pressure from out on the edge under coordinator Patrick Graham. This Georgia product would change that in a big way.

“Fully grown 3-4 outside linebacker with NFL-ready strength and impressive explosiveness. Ojulari is better in pursuit than he is as an edge setter, but he is quick to slide off a block and either make a tackle or accelerate to pursue in space,” NFL Media’s Lance Zierlein noted recently. “His ability to attack pulling blocks and shut down potential running lanes was fun to watch against Alabama.”

That’s the perfect type of outside linebacker in the Giants’ 3-4 defensive scheme. Initially, Ojulari would be used as a pass-rush specialist. However, he could eventually take over for the underperforming Lorenzo Carter as a three-down option. This just makes too much sense.

Los Angeles’ decision to move on from former Pro Bowl cornerback Casey Hayward earlier this offseason made one thing clear. New head coach Brandon Staley values more physical corners dating back to his days with Jalen Ramsey in Los Angeles. Considered by some to be the best cover guy in the class, the 6-foot-1 Horn fits this mold big time.

It’s also important to note that Los Angeles needs help at cornerback early in the 2021 NFL Draft. This unit yielded 29 passing touchdowns against 12 interceptions while allowing quarterbacks to compete 66% of their passes in 2020. Horn could be a Day 1 starter for the Chargers opposite the recently re-signed Michael Davis.

The addition of Denico Autry in free agency is not going to solve a Titans pass rush that recorded a league-low 19 sacks and lost free-agent bust Jadeveon Clowney to the Cleveland Browns. In terms of the 2021 NFL Draft, Tennessee going edge pass rush at 22 is pretty much the biggest lock.

That’s where Phillips comes into play. A transfer from UCLA, he starred for the Miami Hurricanes last season after Gregory Rousseau opted out of the 2020 campaign due to the COVID-19 pandemic. How much so? The 6-foot-5, 260-pound edge rusher overtook Rousseau as the top prospect from the Hurricanes in this class. He could be a Day 1 starter, but will likely be used as a situational rusher behind Autry and Harold Landry.