The New York Giants will look to begin the Brian Daboll era 2-0 on Sunday as they take on the (0-1) Carolina Panthers in their home opener.

After their stunning 21-20 victory over the Tennessee Titans last week, there’s an air of optimism that things are finally heading in the right direction for Big Blue. As we look ahead to Sunday’s game, here are five intriguing storylines to be mindful of this weekend.

Will Saquon Barkley have an encore performance?

Barkley was sensational in the win over the Titans which is why he was named NFC Offensive Player of the Week. He carried the ball 18 times for 164 yards and a touchdown and had six receptions for 30 yards, and scored the game-winning two-point conversion on a shovel pass. The 25-year-old star running back looked as explosive as he did in his rookie season. Now the question is can he do it again against the Panthers?

Last week against the Cleveland Browns, the Panthers gave up 217 yards on the ground on 39 carries. This bodes well for Barkley and the Giants as he will once again be the focal point of the offense. If he has a similar performance as he did last week, expect New York to come away with a win and whispers to begin about Barkley getting a new contract. 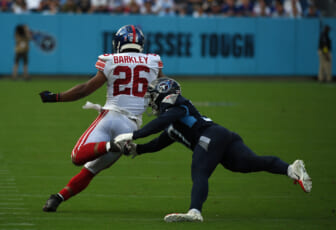 How much will Kadarius Toney play?

This is supposed to be a breakout season for Kadarius Toney, as the second-year receiver is expected to have a pivotal role in the offense. But last week, Toney was only in the game for seven offensive snaps and failed to record a reception but did have two runs for 23 yards.

Daboll said this week that Toney’s lack of playing time was due to Toney’s lack of practice time after dealing with nagging injuries over the summer. Aside from Barkley, Toney is the most dynamic player on offense, and they will need to incorporate him more in the offense. Will this be the week? We’ll have to wait and see.

Daniel Jones had a solid outing last week. Completing 17 out of 21 passes for 188 yards, two touchdowns, and one inexcusable interception in the end zone. Following the interception, Daboll was on the sidelines laying into Jones for his poor decision.

Jones and the offense were able to rebound and get the win, but costly errors such as that one are why New York did not pick up Jones’s fifth-year option. Will being chewed out by his head coach last week be the spark that helps Jones fix his turnover issues, or are these bad habits that he can’t break? 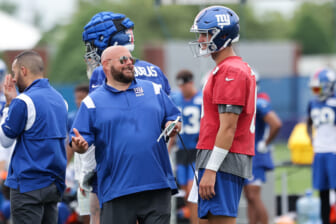 One of the reasons the win over the Titans was impressive, is the fact that they were able to do it without their two best pass rushers Kayvon Thibodeaux and Azeez Ojualri.

New York would obviously like to have both available to harass Panthers quarterback Baker Mayfield, but both are questionable for Sunday. Both were limited in practice on Wednesday and their availability could be a game-time decision. As well as the defense performed last week, it will be interesting to see what defensive coordinator Don “Wink” Martindale will dial up when he has his best pass rushers on the field.

What bold decision will Brian Daboll make this week?

One thing we found out last week in his head coaching debut is that Daboll is going to be bold and aggressive in his decision-making. Few rookie head coaches would take a chance and elect to go for a two-point conversion with the game on the line. Now we’ll have to see what aggressive measures he’ll take this week in the home opener.

The Giants and Panthers are two evenly matched teams and just like last week, the outcome could come down to a decision made by the 47-year-old rookie head coach.