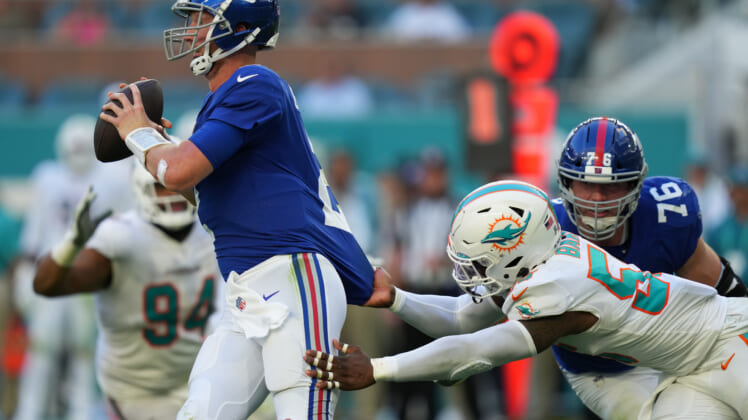 For the second consecutive week under interim offensive coordinator Freddie Kitchens, the New York Giants’ offense was putrid. But unlike last week the defense wasn’t able to carry the team to victory as they were defeated 20-9 by the 6-7 Miami Dolphins.

With Mike Glennon starting in place of Daniel Jones who was out due to neck injury, many felt it would take a few drives for the offense to start clicking.

But the Giants offense was nonexistent all afternoon as they managed just 250 yards of total offense and never found the endzone.

New York offense was conservative and never challenged the Dolphins secondary down the field.

Glennon completed 23 out of 44 passes for 187 yards and was intercepted once. He was sacked three times and was often forced to throw the ball out of bounds.

New York’s ground game also struggled as they ran the ball 17 times for 91 yards, but 40 of those yards came on two runs.

New York briefly held a 3-0 lead in the second quarter due to a Graham Gano 39 yard-field goal. The Dolphins would tie the game on the next possession and then took a 10-3 lead on a five-yard touchdown pass from Tua Tagovailoa to Mark Hollins.

The Giants would cut the deficit to 10-6 in the third quarter on another Gano field goal, but Miami would respond on a Tua Tagovailoa two-yard touchdown pass to extend their lead to 17-6. From there on, the Giants were never a threat to turn the game in their favor as their offense remained stagnant.

Over the last three games, the New York Giants’ offense has scored a combined 32 points, and remain the only team in the NFL not to score 30 points this season. When they fired offensive coordinator Jason Garrett two weeks ago, the hope was that Kitchens would provide a spark. But it’s clear that the Giants offensive woes go way beyond Garrett. Major changes are needed to the roster and front office.

New York is now 4-8 and one loss away from clinching their fifth consecutive losing season. Next up for Big Blue, is a meeting next Sunday at SoFi Stadium against the (7-5) Los Angeles Charges who defeated the Cincinnati Bengals 41-22 on Sunday.

It’s safe to say the Giants will be huge underdogs against the Chargers.