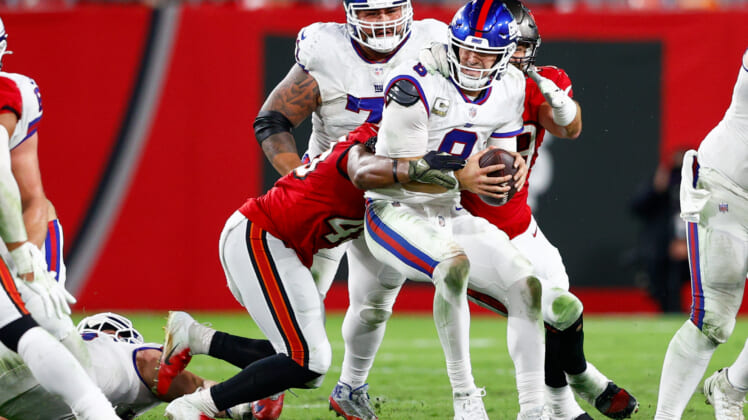 Coming off a bye week and having Saquon Barkley and Andrew Thomas returning from injury, there were reasons to be optimistic that the New York Giants could pull off an upset and defeat the Tampa Bay Buccaneers.

But it was obvious from the first drive of the game that this night was not going to go well for Big Blue and they would go on to lose 30-10.

It took Bucs just eight plays to travel 73 yards to score the first points of the game on a Tom Brady 13-yard touchdown pass to Chris Godwin.

New York would score points on its opening possession as well. But instead of scoring a touchdown, the team had to settle for a Graham Gano 37-yard field goal. Tampa would answer back on its next drive on a Ryan Succop 25-yard field goal to put the defending champs up 10-3.

The Giants would tie the game at 10 midway through the second quarter when Jones threw a two-yard touchdown to Andrew Thomas of all people. New York’s scoring play was set up by an Adoree Jackson interception off a pass that bounced off the hands of Mike Evans, giving New York the ball at the Bucs five-yard line.

The Buccaneers would quickly recapture the lead on their next drive on a Ronald Jones II six-yard touchdown run to take a 17-10 lead.

From there on, the game was dominated by Tampa. The New York Giants never came close to threatening the Bucs as their last eight possession either ended in a punt, a turnover or a turnover on downs.

The Giants’ offense was predictable and conservative. The offensive line constantly lost the battle of the line of scrimmage as Jones was under constant pressure. He finished the game completing 23-of-38 passes for 167 yards, including the one touchdown to Thomas. He also threw two horrible interceptions.

After another subpar performance by Jones, you have to suspect that the clock is ticking on him in his time with Big Blue.

In his return after missing four games due to an ankle sprain, Saquon Barkley carried the ball six times for 25 yards, had six receptions for 31 yards.

For whatever reason, the Giants have been unable to make explosive plays on offense. New York’s two biggest additions in the offseason in Kenny Golladay and rookie Kadarius Toney had a combined eight receptions for 52 yards.

The Buccaneers on the other hand, had no problem moving the ball on Monday night.

Tom Brady completed 30-of-46 passes for 307 yards and two touchdowns, including a five-yard touchdown to Mike Evans in the third quarter to extend their lead to 24-10.

Tampa was also more effective running the ball as they outgained Big Blue 94 to 66 on the ground.

Following the loss, the Giants are now 3-7 and are in the basement of the NFC East. With all of the draft capital and money they spent in free agency on the offensive side of the ball the last few years, it’s inexcusable for this team to be so putrid on offense.

Ownership and fans are losing patience with New York’s losing ways, and changes could be coming sooner than later.

The Giants will look to rebound on Sunday when they take on the 5-6 Philadelphia Eagles at MetLife Stadium.