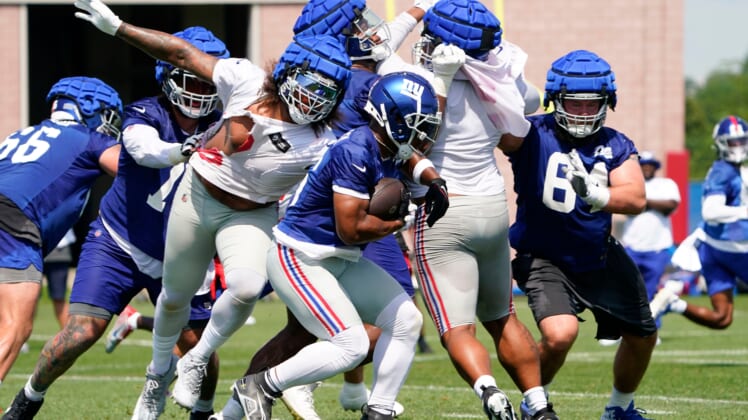 Prior to practice, Daboll and general manager Joe Schoen spoke with the media and stressed the importance of getting better each day and wanting to build a smart and physical team.

They also mentioned that the bulk of the reps in practice would be red zone situations, and stated that the team would not practice in pads until Monday to allow the players to get acclimated before ramping up the physicality.

Let’s take a look at some of the most noteworthy moments from the first official day of the New York Giants training camp.

As you would expect the first-team offense had some highs and lows on the first day of practice. Some of the highs were Kadarius Toney making a juggling catch for a touchdown while being tightly defended by Aaron Robinson. Jones also connected with Saquon Barkley and rookie Wan’Dale Robinson for touchdowns. Then a few plays later in that session, Daniel Jones executed a quarterback draw for a touchdown. 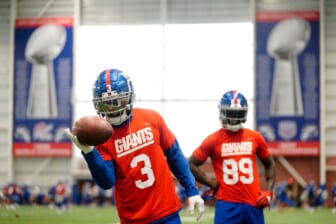 New York’s second-team offense led by Tyrod Taylor had an impressive first day. Taylor connected with fifth-year wide receiver Richie James on a couple of touchdowns and connected with running back Matt Breida for a score as well.

Brian Daboll will use Saquon Barkley all over the field

It was clear early on in practice that Daboll and offensive coordinator Mike Kafka intend to use Saquon Barkley as a Swiss army knife. In addition to lining up in the backfield, Barkley was lined up in the slot and spread out wide out at receiver. If he can stay healthy, Barkley will get over 300 touches and over 2,000 all-purpose yards in this offense.

One of the intriguing position battles to watch for in camp will be who will be the starting corner opposite Adoree’ Jackson. Second-year cornerback Aaron Robinson got the first crack at the job as he played with the first-team defense. Although he gave up a touchdown to Toney, he was in tight coverage for the entirety of practice. 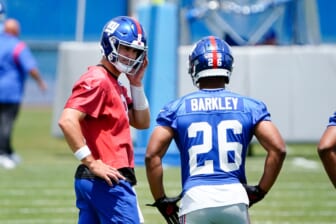 Spot as punt returner has a lot of early candidates

In addition to the red zone offense, the Giants used a good portion of the morning to do special teams drills. One of the questions heading into camp is who will be New York’s punt returners? We got a good indication of who will be battling for the position as Darnay Holmes, Darius Slayton Richie James, Alex Bachman, and Austin Proehl all fielded punts on Wednesday.

There was a new twist following the Giants’ last practice rep of the day. The team had a stretching session before they huddled together in the middle of the field to end the practice. Everyone knows how the Giants have been ravaged with injuries for many years, so perhaps this new regime believes that stretching after practice can limit the number of injuries. Time will tell if that will be true.

All in all Wednesday’s practice was what you would expect from the first practice of the year. Everyone was in good spirits and there was little physicality. The Giants will be back at practice Thursday morning where the activity could be ramped up slightly. 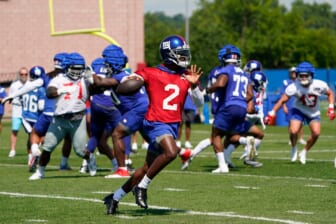