Blake Griffin and the 5 most overrated NBA trade targets 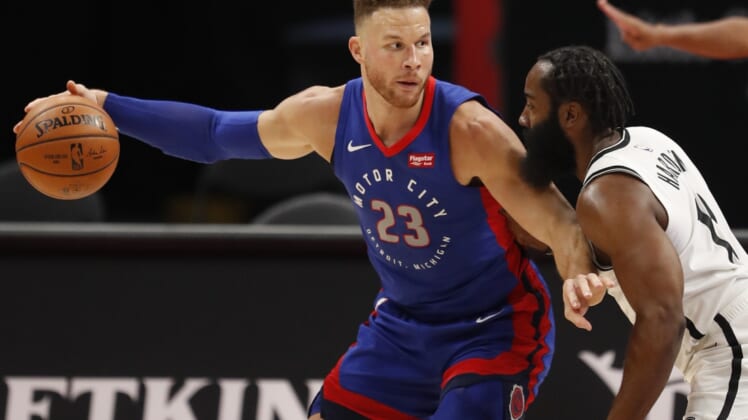 We’re already hearing talk of some big-name NBA trade targets before the March 25 deadline. Just recently, the Detroit Pistons decided to sit four-time All-Star Blake Griffin as they look at trade and buyout options. Fellow All-Star big man Andre Drummond of the Cleveland Cavaliers is also sitting as they look to trade him.

It’s not a surprise that rebuilding teams are interested in moving bloated contracts. Whether those in contention show interest is another story. Specifically, it’s hard to imagine any team taking on Griffin’s contract. That leads us to the point of this article.

In addition to Griffin and Drummond, there’s going to be some high-priced veterans on the market. This is more true in 2021 than ever before due to the economic downswing brought on by the coronavirus pandemic. Below, are five players who could be considered overrated NBA trade targets.

Acquired as nothing more than to make salaries match in the Jrue Holiday blockbuster with the Milwaukee Bucks, Bledsoe doesn’t have much of a future in New Orleans. The Pelicans’ two point-guard backcourt of Bledsoe and Lonzo Ball has not worked out — leading to speculation that both could be moved. The major question here is whether a contending team would offer NOLA much of anything for the 31-year-old Bledsoe.

He’s averaging what would be a nine-year low 12.7 points to go with 3.6 rebounds and 3.7 assists on 44% shooting from the field. And while Bledsoe’s numbers are down due to a decrease in minutes, the $37.5 million he’s owed over the next two seasons will be a sticking point. If the Pelicans are able to move Bledsoe, it likely won’t be for anything more than a couple second-round picks and another bad contract.

Previously seen as a defensive stopper and a three-and-D wing, Tucker has had a tremendous amount of success throughout his career. That has changed big time this season. The 35-year-old veteran has hit that proverbial wall. He’s averaging 4.7 points and 4.6 rebounds on 38% shooting from the field. Tucker’s defense has also regressed thus far this season.

If contending teams are looking to pull off an impactful NBA trade over the next few weeks, Tucker most likely won’t be that guy. Sure he offers a wealth of experience. Tucker’s expiring contract also has to be seen as attractive. With that said, he’s simply not the player we saw. In no way will the Rockets receive their reported asking price of two second-round picks for the forward.

There’s been a massive amount of NBA rumors linking Gordon to a trade over the past couple years. We’re not sure if those are going to continue leading up to March 25 with him currently sidelined to an ankle sprain. What we do know is that Gordon’s numbers have decreased big time since he was seen as a potential building block for the Magic back in 2017-18.

The former top-five pick is averaging just 13.8 points and 7.2 rebounds on 43% shooting from the field this season. He also averaged just 14.4 points in 2019-20 after putting up 16.0 and 17.6 in the previous two seasons, respectively. Even with his pretty decent $16.41 million salary for the 2021-22 campaign, it’s hard to imagine the Magic getting much for the forward.

Read More: Orlando Magic should blow it up ahead of NBA trade deadline

Repeat after me. The Detroit Pistons are not going to be able to trade Blake Griffin. Please, inform those hoping that they can get out from under the remaining $50-plus million on his contract that the six-time All-Star is completely washed. Griffin, 31, is averaging 12.3 points and 5.2 rebounds on a disastrous 37% shooting from the field this season.

Prior to the 2020-21 campaign, Griffin had played in 18 games last season. He’s injury-prone. He’s on his last wheels. His contract is absolutely absurd with a cap hit of $38.96 million in 2021-22. If any general manager were to make a move for him, that would be the end of the executive’s career with said organization.

The numbers for this two-time All-Star are solid. Drummond is averaging 17.5 points, 13.5 rebounds and 2.6 assists on 47% shooting from the field. Unfortunately, simple stats never tell us the entire story.

Drummond can’t switch on defense. He struggles with pick and rolls on offense. As one NBA executive put it, Drummond could give you 30 points and 20 rebounds on a nightly basis, all the while not making much of an impact. The premise seems nice. Add a two-time All-Star on an expiring contract. Unfortunately, Drummond’s old-school and one-dimensional game does not fit in with the modern NBA.