The Minnesota Vikings addressed key needs in the 2021 NFL Draft and happened to land a great Kirk Cousins contingency plan in Kellen Mond. 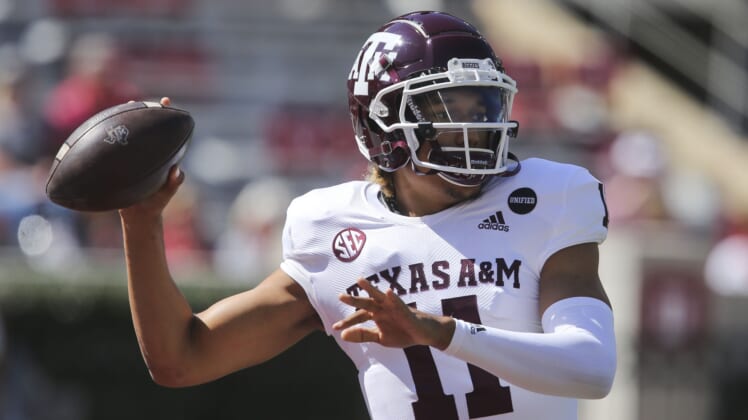 On draft night, once the Minnesota Vikings were on the clock, they used their position to trade down for more capital. With that move, they scooped up a total of three draft picks. General manager Rick Spielman used two of those picks to draft left tackle Christian Darrisaw and guard Wyatt Davis in the first and third rounds.

The idea behind those selections was to get Kirk Cousins the protection he needs to consistently have success from the pocket. After releasing Riley Reiff in the offseason and previously having struggles holding up along the interior, addressing the offensive line was a must heading into the 2021 football year.

The irony is, with the 66th pick and final piece of Spielman’s trade down the board, Cousins’ eventual replacement may also have been selected. Read on to discover why drafting Kellen Mond in the third round was a touchdown for the Vikings.

Read More: Minnesota Vikings draft Kellen Mond in the third round of the 2021 NFL Draft

Entering the draft, Spielman and Vikings’ ownership quietly had a major decision to make. Should they make a move akin to what the San Francisco 49ers did, using future draft picks to chase a big fish near the top of the order?

Or, the alternative, if possible, was to fix the offensive line, thus supplying Cousins with everything needed to succeed. In theory. Obviously, they chose the latter.

If Minnesota’s brain trust feels like they can make a strong playoff push this season, door No. 2 was the right choice.

Had Trey Lance or Justin Fields been graded as a generational talent, the Vikings likely made a mistake. Chances are, the 49ers pounced earlier than most anticipated. If Fields was graded that highly internally, Spielman wouldn’t have hesitated to pay the price, precious draft picks be damned.

While one notable report stated that the Vikings tried to move up for Justin Fields when he began to slip, it sounds like Spielman didn’t want to part with next year’s first-round selection along with the No. 14 pick. Which, given that Cousins is remarkably better than anything the Chicago Bears have at QB, makes sense.

Simply put, the Vikings were not as desperate as some other teams were heading into the draft. They still like what Cousins brings to the table, yet they realize this may be a make-or-break season.

What does drafting Kellen Mond mean for Kirk Cousins’ future in Minnesota?

For his part, Cousins was respectful, even welcoming the new protege QB to the roster. If there’s one thing his contract dealings have taught us, it’s that Cousins is financially smart.

Of course the irony is strong with this one. Cousins entered the NFL as a fourth-round pick in the 2012 NFL Draft, and had to bide his time for three seasons before becoming a starter. While Mond is assuming a very similar role to what Cousins once had, there is no timeline guarantee in the Twin Cities.

For this upcoming season, Spielman stated, “Kirk’s our starting quarterback. There’s no competition there.” While that may be true entering the year, if the Vikes find themselves competing for draft picks instead of playoff positioning, things could change in a hurry.

If the offensive line can truly improve to even being above average in pass protection, then Cousins won’t really have any other excuses when things hit the fan. Not only is he below-average at making off-schedule plays, but the increasing costs of his contract also make adding star power to a roster nearly impossible.

Say Mond develops into an NFL-caliber starter after being selected in the third round. All the money that would go toward a lucrative Cousins contract beyond 2022 could then be spent elsewhere (That’s the price of two Danielle Hunters).

Maybe after one season, Mond has shown the Vikings enough that they opt to try and trade Cousins, part with his $45 million 2022 salary and save $35 million, with a $10 million dead cap charge, per Over the Cap.

Mond has traits that made him a top-four QB prospect in some circles, and if he puts those to good use, the Vikings will have essentially spent next to nothing to acquire a new potential franchise quarterback. For Spielman and the Vikings’ front office, drafting Mond was a win-win situation any way you look at it.