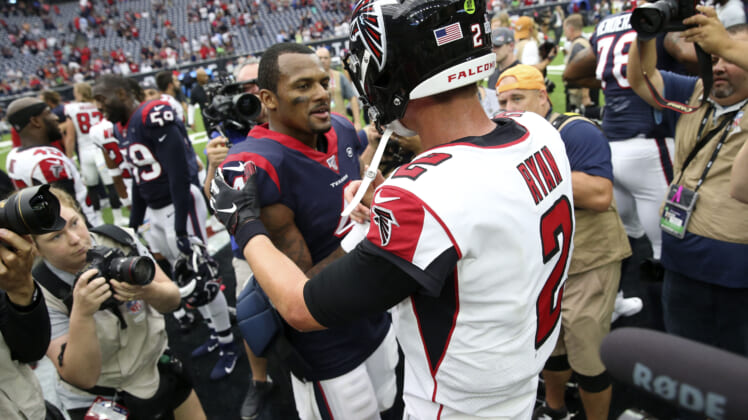 The recent news of the Atlanta Falcons seriously pursuing a trade for Deshaun Watson may have come as a surprise to some, but not to Matt Ryan.

According to Chris Mortenson of ESPN, the Falcons front office notified Matty Ice last weekend that they’d be interested in acquiring Watson, if the feeling is mutual. Based on an earlier report, linking Watson to the Falcons from his childhood days as a ball boy for the organization, there could be interest on both sides.

Matt Ryan’s contract restructure is not yet official

There are a few factors here complicating matters. First is the contract of Matt Ryan. Last week it had been reported that the Falcons had submitted a contract restructure to the league office, only they never quite went through with it. The recent word was that they are ready to do what’s needed to lower his cap number via a restructuring, but only if they need to.

In other words, if a trade for Watson becomes a legitimate possibility, the restructure likely won’t be needed. But if Watson doesn’t say yes to the Falcons over the three other interested teams, the Falcons may need to lower Ryan’s league-leading $48.2 million cap hit in 2022 in order to improve the roster elsewhere.

Both Matt Ryan and Deshaun Watson have a no-trade clause

If the Falcons win the Deshaun Watson sweepstakes, they then need to find the best trade landing spot for Matt Ryan. Like Watson, he has a no-trade clause, which likely will place him in an opportunity to start right away.

Currently having the most cap space in the league at just over $44 million, the Indianapolis Colts could emerge as a natural contender for Ryan as they look to compete right away. It could be a win-win scenario for everyone involved.