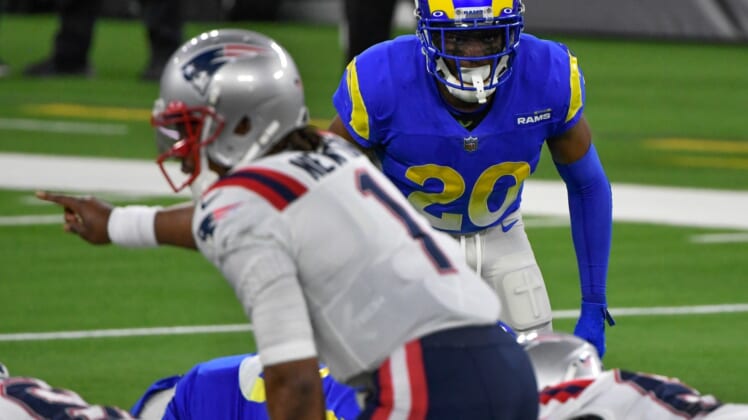 The Los Angeles Rams have a problem at quarterback. Just over a year after the team signed Jared Goff to a lucrative contract extension, the feelings between Sean McVay and his franchise quarterback could lead to changes this offseason.

During the regular season, signs of trouble appeared when McVay stopped showing a willingness to defend Goff’s mistakes in press conferences. Then, after he suffered a broken thumb, Goff found himself on the bench to start the playoff matchup against the Seattle Seahawks. He came in and the team won but the Rams were eliminated a week later by the Green Bay Packers.

After another playoff loss, McVay left the door open to a change at quarterback in 2021. Shortly after the face of the team’s offense had doubt cast over his future, details emerged about a growing rift between Goff and McVay.

There is now drama in Los Angeles, surrounding the most important position in sports. There are also plenty of great quarterbacks available this offseason, but the Rams lack of draft capital and cap space will prevent them from landing a Deshaun Watson or Zach Wilson.

So, let’s look into the most realistic options to challenge Goff for the starting job in 2021.

There’s not a better fit for Sean McVay’s offense than Deshaun Watson. But, barring the Houston Texans accepting an offer with three future first-round picks, Goff and more talent, he isn’t coming to Los Angeles. Factoring in the team’s limited cap space, Dak Prescott is off the table.

Fortunately, there are a few options that McVay could find intriguing to become the Rams quarterback in 2021.

There’s no denying Newton’s 2020 season with the New England Patriots was a disaster. Hopes for a sudden reclamation project were quickly dashed as the veteran quarterback showed the toll years of hits took on his physical abilities. With that said, the Patriots did him no favors. New England had the NFL’s worst receiving corps and play-caller Josh McDaniels did nothing to provide any confidence in his abilities as a coordinator. Needless to say, the situation would be a lot different in Los Angeles.

For one, Newton would play behind a better offensive line. The Rams ranked sixth (88.8) in PFF’s pass-blocking efficiency and the Patriots ranked 18th. There’s also a country-sized difference in talent between a pairing of Cooper Kupp and Robert Woods vs. N’Keal Harry and Damiere Byrd.

McVay’s offense is designed to center on the running game, which sets up the play-action pass and keeps defenses from sending constant pressure to the quarterback. This scheme would also look even better with a quarterback who could throw on the run, move in the pocket and open up the playbook for boots and roll-outs. Newton fits all of those things and with the personnel around him, he would lift the ceiling of the Rams’ offense more in 2021.

Ryan Fitzpatrick has enjoyed a rather impressive 16-year NFL career. At times, it’s felt like he gets even better with age. Yet, as the 38-year-old prepares to enter his 17th NFL season, he hasn’t played for a team on the West Coast. It’s rather surprising, given he grew up on that side of the United States. Why not return close to his roots?

We know there is still FitzMagic left in the tank. There’s plenty to like about this fit for both sides. Fitzpatrick completed 68.5% of his passes this past season, finishing with a 13-8 TD-INT ratio and a 95.6 quarterback rating. He also performed better under pressure (74.6 quarterback rating) than Jared Goff (45.9) despite the latter having vastly superior circumstances.

There’s also something to be said for having a quarterback who an entire team rallies around. Ask Fitzpatrick’s former teammates with the Buffalo Bills, New York Jets, Tampa Bay Buccaneers and Miami Dolphins and they’d all probably run through a wall for him. He can compete with Goff for the starting job in training camp and might even win. Plus, given how strong the rest of this team is, this might be his best shot to compete for a Super Bowl.

How lucky do you feel? There are a lot of reasons why most NFL fan bases want no part of Jameis Winston. When you throw a league-high 30 interceptions in 2019, along with a pick-six every other week, many will focus on the negatives. With that said, he will be one of the most talented quarterbacks available this offseason.

Remember, in that 2019 season, Winston also threw for 5,109 yards and 33 touchdown passes. According to Player Profiler, he led the NFL in deep passes (113), ranked 14th in pressured completion rate (37.2%) and had the eighth-most money throws (19). He also finished with the fifth-most passing yards (1,133) on play-action throws despite ranking 18th in attempts.

After spending a year with Drew Brees and Sean Payton, Winston has likely gained important insight into reading defenses and playing the quarterback position. In Los Angeles, he could learn from another bright offensive mind. McVay could tweak his offense to take more vertical shots, creating a well-balanced attack with tons of explosive ability. A one-year contract with an opportunity to win the Rams quarterback job in camp could work for both sides.

Here’s where things get really interesting. Mitchell Trubisky isn’t returning to Chicago and that’s the right decision by the organization. Things didn’t work out with the Bears and he was always going to be tied to the front office’s disastrous choice to select him over Deshaun Watson and Patrick Mahomes.

Trubisky’s stretch of solid play to close out the regular season can actually be partially attributed to McVay. Chicago remodeled its offense to make life easier for its quarterback, using the same kind of quick reads and short passes that McVay uses for Goff.

The Rams could run the same offense with Trubisky that they use with Goff, but there’s a difference here. Trubisky is a superior athlete to the current Rams quarterback. Given how much McVay loved John Wolford thanks to his mobility, he could have a similar appreciation for Trubisky. On a one-year contract, this makes sense for the Rams.