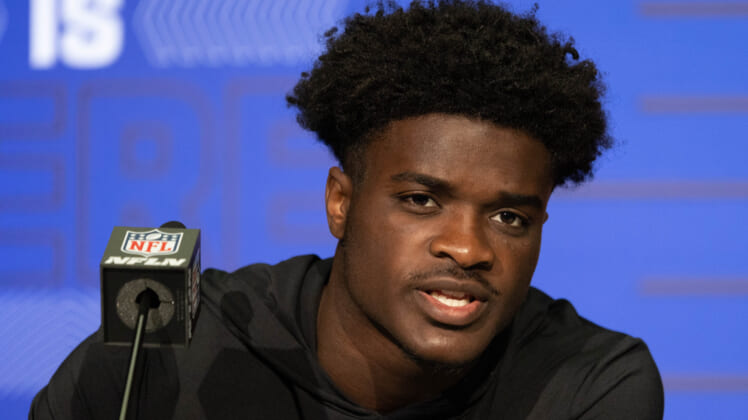 Is Las Vegas Raiders general manager Dave Ziegler going to make us wait until pick No. 86 to see his first selection? No one knows for sure, but on Wednesday, he told the media that the team will entertain trade offers.

Without a first- or second-round pick because of the Davante Adams trade, the Raiders have no choice but to let the early selections play out and keep an eye on prospects who may slip toward the back end of the second round or into the third round.

If Ziegler makes a deal, don’t expect a big jump, though he may move up several slots to land a prospect who has immediate starting potential or a player coming into the league with tremendous upside.

The Raiders need competition and depth on the offensive and defensive lines along with some playmakers in the secondary. Who’s worth a look if available 10-15 spots ahead of the Silver and Black? We’ll highlight five prospects the Las Vegas Raiders can target in a draft-day trade.

Arguably the most physical safety in the class, Jaquan Brisker may not make it out of the second round. As a defender who’s at his best in the box with some familiarity in the slot, he may draw defensive coordinator Patrick Graham’s interest.

Brisker would immediately strengthen the Raiders’ run defense, and he’s less susceptible to terrible whiffs while in pursuit. You won’t see him take a lot of poor angles on his tackles, and he’s not a penalty machine while playing downhill. The Penn State product brings controlled aggression to the game, which is something Vegas needs at the position.

Even though Brisker translates as a box safety on the pro level, he has some ball skills, logging 14 pass breakups and five interceptions through three collegiate terms. The athletic safety should be able to line up against pass-catching tight ends.

If the Raiders want a potential upgrade over Johnathan Abram, they may have Brisker high on their big board.

Daniel Faalele belongs on every Raiders fan’s dream list. At 6-foot-7 and 384 lbs., he’s a ginormous right tackle who has a ton of upside because he’s fairly new to the game. The Australian native just started playing football in 2017.

Though Faalele has to work on his technique and the mentality to impose his will on opponents, he’s made significant strides as a three-year starter on the collegiate level. Obviously, the Minnesota product’s sheer size presents issues for defenders, but he can also move well laterally for a mammoth man.

The Raiders would select Faalele with an idea of what he could become in a short period. With some good coaching, they could see him develop into a high-quality starter opposite of left tackle Kolton Miller.

Faalele could land somewhere between the second and third rounds, so the Raiders need to keep an eye on offensive tackles left on the board midway through Day 2.

Darian Kinnard logged most of his snaps at right tackle, but some teams may move him inside because of his size (6-foot5, 322 lbs.) and roughhouse playing style.

With some offensive linemen, you see a passive nature in their tendencies on the field, that’s not the case for Kinnard. He’ll punch first, use his vice grip to steer defenders out of passing and running lanes and drive you to the ground before the referee blows a play dead. The Raiders won’t have a shot at Northern Iowa’s Trevor Penning, but Kinnard brings a similar nastiness to the trenches. 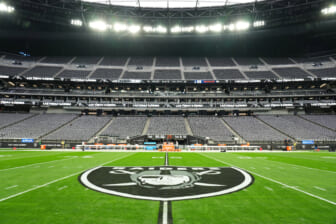 In addition to his physical nature, Kinnard isn’t a stiff on the perimeter. He can move with athletic pass-rushers and swat them with his big 11.25-inch hands. Because clubs may not be sure where to play him, the Kentucky product could slip into the third round. If that’s the case, the Raiders should make a move for a tackle with Day 1 starting potential.

At 6-foot-4 and 310 lbs, Phidarian Mathis has the size and play strength to handle two-gap assignments, though he’s also shown some growth in his pass-rushing ability, logging nine sacks to go along with 12 tackles for loss in 2021.

As a defensive lineman at Alabama, Mathis played in a “multiple” scheme, which would help him pick up Graham’s system. As a rotational defender, he can line up anywhere between the guards on all three downs. Vegas still needs high-motor guys in the trenches, so it would make sense to trade up several spots for him if he slips into the third round.

Mathis has great hand technique and with continued improvement in his ability to penetrate the pocket, he’s capable of playing two-thirds of the snaps. Only a two-year starter on the collegiate level, the physical mauler has tangible upside. Next to Bilal Nichols, the Alabama product could wreak havoc on the interior.

Some teams may look at Roger McCreary’s measurements and pass on him. He’s 5-foot-11 with 28 ⅞-inch arms, but we shouldn’t overlook his skill set and extensive experience as a productive starter with six interceptions and 31 pass breakups since 2019.

At Auburn, McCreary mostly lined up on the boundary and excelled in press-man coverage. Despite his stature, he plays with physicality and isn’t afraid to invade a receiver’s space off the line of scrimmage. On top of that, the feisty cover man tackles well in open space. He’s not going to allow too many yards after a reception while in position to make a play.

The Raiders would likely shift McCreary between the boundary and the slot to see where he fits best. Remember, Nate Hobbs could move to the perimeter, which leaves a spot open on the inside. While other clubs may focus on McCreary’s physical limitations, Graham could see an opportunity to tap into his versatility.

College statistics are provided by cfbstats.com.