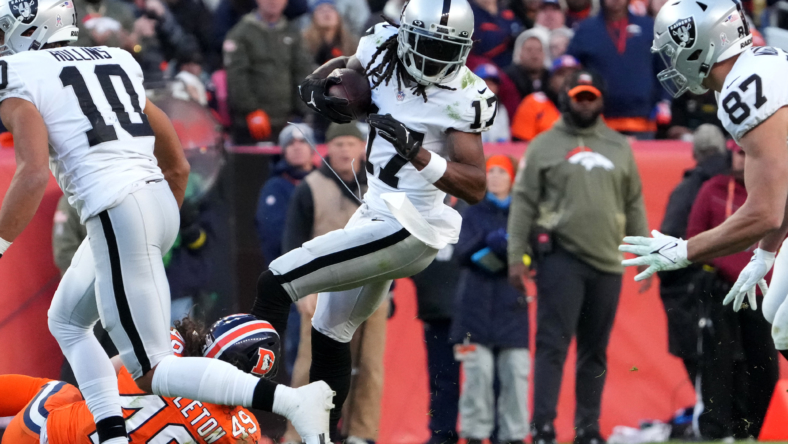 After starting the season 0-6 in one possession games, the Las Vegas Raiders got in the win column with a 22-16 overtime victory over the Denver Broncos on Sunday afternoon at Empower Field inside Mile High Stadium.

In extra time, after the Raiders could not get anything on first down from running back Josh Jacobs, it was time for quarterback Derek Carr to step up with his arm. The Raiders called back-to-back play-action passes and Carr found tight end Foster Moreau up the seam for a 33-yard gain.

On the ensuing play, the Fresno State duo connected for the seventh time of the afternoon as Davante Adams was wide open for a 35-yard walk-off touchdown to end Las Vegas’ three-game losing streak and record a season sweep over Denver.

“I saw it go up in the air and really, it happens slow, but it happens fast,” Las Vegas Raiders wide receiver Davante Adams said after the game about the final play. “It wasn’t really a whole lot of thinking. It was lock in on the ball and make the play.”

Here are 4 takeaways from the Raiders first road victory of the season.

On Sunday, the Raiders were once again able to get the run game going, led by running back Josh Jacobs. He had 24 carries for 109 yards. No other Raiders running back recorded a rush.

“I thought JJ hung in there, he had to be patient and grind out a few tough yards out there, but I thought he did a good job,” head coach Josh McDaniels said. “Took care of the ball again, which is always a good thing. Gave us an opportunity to use some play-action passes. A lot of credit should go to JJ and the running game.”

Jacobs was also a force in the passing game as he was third among his teammates with three catches for 51 yards. He became the first Raiders player to record 100 rushing yards and 50 receiving yards in a game since 2013.

The 24-year-old recorded a long catch and run inside one minute of regulation as the play lasted 43 yards giving the Raiders a possible chance to win the game before the clock reached triple zeros.

The Las Vegas run game was successful was the blocking up front, despite starting left tackle Kolton Miller being inactive due to a shoulder ailment.

The entire Raiders O-line was successful as they were able to let Jacobs get going while only allowing one sack, protecting Carr in the pass game, who completed 23-of-37 passes for 307 yards and two touchdowns.

One of the challenges from keeping a perfect game for the Silver and Black was the team committing penalties that hurt drives in all four quarters.

In the first half, Las Vegas was flagged six times for 73 yards, including two holding penalties on the team’s second drive, that led to no points.

For how much the running game was used on each side, both teams only had three possessions each in the game’s first 30 minutes. As a result, every play meant something and penalties for both sides hurt even more.

As the Raiders were trying to take the lead before the conclusion of the fourth quarter, penalties continued to strike, including to Adams, who was called for an unsportsmanlike conduct that cost the team 15 yards and a loss of downs. That penalty led to one of AJ Cole’s punts on the day.

Adams, who recorded seven receptions for 141 yards and two touchdowns, said as a leader on this team, he can not hurt the team even more despite things not going the Raiders way as of late.

“That was stupid by me to even put this team in that position at that point,” Adams said. “I felt there been a lot of that going on lately and it gets frustrating. I’ve got to be way smarter than that. That’s not a good play by a captain and veteran. I can’t hurt the team off my frustration.”

Crosby comes up big on defense and special teams

The Las Vegas execution was superb, especially when they needed to most. The Broncos, who won the opening clip flip and chose to defer, were threatening to score late in the second quarter and having the idea they would receive the ball to open the third quarter.

As a result, it was up to the Raiders defense to make a stop and go into halftime with the momentum to keep the deficit at a 10-7 score.

The defense would deliver as defensive end Maxx Crosby forced a fumble on third down inside the five. The Broncos would pick up the ball for a loss of five yards bringing out the field goal unit for a 25-yard chip shot attempt.

However, Crosby came up again, putting his hand up and blocked the kick to keep the deficit as three.

McDaniels said the team felt the momentum going into the locker room at the break as it would affect the outcome down the stretch.

“I thought there was a lot of energy,” McDaniels said going into halftime. “We’ve been working really hard. We’ve been really close in practice of trying to get that done and we know those plays make a huge difference. If you don’t block that field goal, then you have to score a touchdown at the end of regulation.”

On the other side of the half, Crosby, who recorded six tackles, two sacks and three tackles for loss, recorded one of his quarterback sacks on third-and-9 at the Denver 14-yard line to put up zero points on back-to-back important possessions.

“Effort, great leadership this week, he was pursuing Russell (Wilson) as much as he could in the pass rush,” McDaniels said of Crosby. “I thought he was really active at the point of attack in the running game and also ran a few plays down from behind. Just gives tremendous effort on every play.”

A kicking battle unfolds a mile above sea level

This game not only featured a strong matchup on offense and defense, but also in the kicking game between Raiders’ Daniel Carlson and Broncos’ Brandon McManus.

Although Carlson missed from 46 yards out for his first missed field goal of the season, he came back making two from 50-plus yards, including a career-long of 57 yards in the fourth quarter.

As Carlson and McManus were trading field goals, it was Carlson who would get the nod as he knocked down a 25-yarder to force the game in overtime, leading to the Raiders win.

Up next, the Raiders travel up to the northwest to take on the Seattle Seahawks on Nov. 27 at 1:05 p.m. PT.