All-Star point guard Ben Simmons might finally get his trade demand fulfilled, with the Philadelphia 76ers reportedly engaged in discussions with multiple teams about a blockbuster trade.

Reports surfaced on Dec. 10 that trade talks between the 76ers and other interested teams were ‘gathering momentum’ with president of basketball operations Daryl Morey discussing both two- and three-team deals.

Now, per The Athletic’s Shams Charania, those efforts are ramping up even more and a new pool of potential Ben Simmons trade destinations is emerging.

“The New York Knicks, Los Angeles Lakers, Minnesota Timberwolves, Portland Trail Blazers, Sacramento Kings, Indiana Pacers and Cleveland Cavaliers are among the teams interested in Simmons, sources said, although it’s unclear how much traction Philadelphia truly has on any move.”

The list of interested teams doesn’t offer too many surprises. Los Angeles has long been reported as Simmons’ preferred landing spot, preferring to live in California and believing the organization is better for him mentally and physically. The Minnesota Timberwolves and Portland Trail Blazers have also been tied heavily to trade discussions involving Simmons.

Portland isn’t willing to include Damian Lillard, which does hurt its chances as the 76ers want an All-Star talent back for Simmons. But the Trail Blazers were reportedly willing to package C.J. McCollum, draft picks and a young wing (Nassir Little or Anfernee Simons). 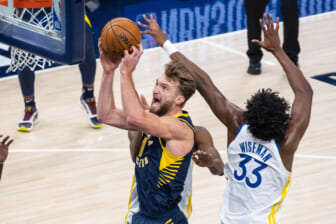 The Indiana Pacers offer intriguing possibilities for a potential blockbuster deal. Indiana is reportedly considering a rebuild, shopping top talents like Domantas Sabonis and Myles Turner. While a trade to the Pacers wouldn’t be Simmons’ ideal outcome, it would give him a fresh start in a low-pressure environment.

Among the other interested teams, the Sacramento Kings, New York Knicks and Cleveland Cavaliers could all offer trade packages with young talent and first-round picks. But if the 76ers are determined to land one of their targets on a shortlist for Simmons, a deal might be weeks away.