The Philadelphia 76ers are taking their own sweet time dragging their feet on any potential Ben Simmons trade. While it’s understandable to be careful and cautious when determining the trade value of Simmons, having one of your best players waste away on the sidelines isn’t a great way to win basketball games.

Now, The Athletic is reporting Daryl Morey, the president of basketball operations for the Sixers has a list of 30 players the team would reportedly be interested in acquiring in any Simmons trade out of Philly.

Though we may not hear of such specifics very often regarding trade talks, this is likely a common practice for general managers across the Association. Teams are constantly doing homework on players from around the league. It’s no surprise that months after Simmons requested a trade, his team has assembled a realistic list of “conversation-starters” in a potential trade.

Having a ready-made list only helps get negotiations started.

A team like the Minnesota Timberwolves may call, offering players such as Malik Beasley, Naz Reid, and Jaden McDaniels, only to have Daryl Morey, or their GM Elton Brand respond, saying the only way they listen is if Anthony Edwards is included. To which, Timberwolves president of basketball operations Sachin Gupta would quickly direct the conversation elsewhere. 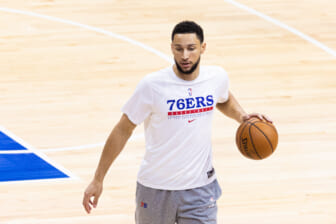 Philly’s list could consist of several pipe dream acquisitions such as the very best players in the league. We don’t know how many realistic options are on the list.

Some might suggest Detroit’s Jerami Grant may be on said list. The Philadelphia Inquirer stated the Sixers have recently discussed a Grant for Simmons trade, but it didn’t move the needle, with the 76ers desiring more value.

There’s also the nugget that Morey would be interested in re-acquiring James Harden (shocker). Which, brings me back to my point, they have a list of 30 players. Who’s to say it isn’t dominated by talents such as Harden, Giannis Antetokounmpo, Stephen Curry, and other megastars?

Are the Sixers even trying to trade Simmons at this point, or is this simply more public posturing to save face with their fanbase? Morey has already stated a willingness to let this drag on for four years. If that happens, Morey probably won’t be around to see what type of return they receive for trading Simmons.